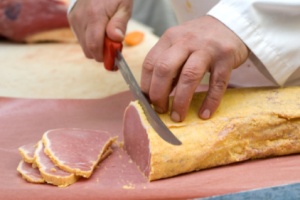 The U.S. Department of Labor's regional solicitor's office in Boston has filed a complaint against DeMoulas Super Markets Inc., doing business as Market Basket, with the Occupational Safety and Health Review Commission (OSHRC). The complaint asks the commission to order the Tewksbury, Mass.-based chain to comply with OSHA's safety standards designed to protect employees from fall and laceration hazards at the employer's more than 60 stores in Massachusetts and New Hampshire.

This request for enterprisewide relief is based upon hazards OSHA found during inspections of various DeMoulas stores, including the agency's most recent inspections at Market Basket stores in Rindge and Concord, N.H. Those inspections resulted in citations and proposed OSHA fines totaling $589,200, which DeMoulas has contested to the OSHRC.

The department's complaint alleges that employees at multiple Market Basket stores were exposed or likely to be exposed to fall hazards from unguarded, open-sided work and storage areas, including storage lofts and atop produce coolers and freezers. An employee of the Market Basket store in Rindge was seriously injured in April 2011 when he fell 11 feet onto a concrete floor from an inadequately guarded storage mezzanine, and an employee at a Billerica, Mass., store was seriously injured under similar conditions in 2007.

The company also allegedly failed to protect employees in produce, deli and bakery departments against laceration hazards from knives and cutting instruments by not conducting job hazard analyses that would have identified the need for hand protection, and by not providing such hand protection to workers exposed to the hazards. In 2006, after being cited by OSHA, the company agreed to complete job hazard analyses in all stores but failed to do so. Between 2008 and 2011, employees at the Rindge and Concord stores sustained at least 40 recorded hand lacerations.

"Worker safety is not optional, and it cannot be addressed in a piecemeal fashion. It must be addressed across the board," said Michaels. "This employer has the responsibility to safeguard all its employees at all its locations, something it has failed to do."

This complaint filed with the OSHRC marks the second such time that the department has expressly sought enterprisewide relief from an employer. The first time was against the U.S. Postal Service in July 2010 for correction of electrical work safety violations at 350 postal facilities throughout the nation. That matter is pending.