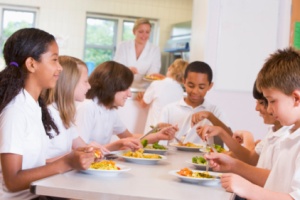 Bowing to negative headlines and pressure from lawmakers, the USDA will soon give school districts the choice of opting out of  "pink slime," a blend of beef scraps treated with amonia hydroxide intended to kill bacteria.

The substance was first used as in animal feed before finding its way into meat products meant for humans due to it being an inexpensive way to bulk of ground beef.

Rep. Chellie Pingree of Maine fired off an angry letter to Agriculture Secretary Tom Vilsak on Wednesday, demanding that school lunch programs in the U.S. no longer serve pink slime in their offerings.

"It is wrong to feed children a slurry that was formerly only used for dog food," Pingree wrote. She said the U.S.D.A. -- which buys up to one-fifth of the food served in schools -- should to stop buying hamburgers and other meats that contain the product.

The U.S.D.A. buys up to one-fifth of the food served in schools.

Pink slime is described as "lean finely textured beef" by its manufacturers, Beef Products, Inc. and Cargill Meat Solutions, although opponents point out that the product consists mostly of connective tissue, so labeling it as meat is deceptive. They also doubt that ammonia is effective in killing E. Coli, Salmonella and other meat-born pathogens.

The meat industry and the Department of Agriculture insist that the product is safe, but negative publicity has lead to several fast food chains eliminating it from their products.

“The beef industry sent my office an email the other day describing pink slime as ‘wholesome and nutritious’ and said the process for manufacturing it is ‘similar to separating milk from cream,’ Pingree said in a statement accompanying her letter to Vilsack.

"I don’t think a highly processed slurry of meat scraps mixed with ammonia is what most families would think of as ‘wholesome and nutritious.’”

While pink slime has been estimated to be in up to 70 percent of the ground meat and burgers in the U.S., it has only recently become the focus of media and public attention. Celebrity Chef Jamie Oliver, who has focused shows on nutrition for children, has railed against it, and an online petition calling for an immediate end to the use of pink slime in children's school food has garnered 225,000 signatures to date.