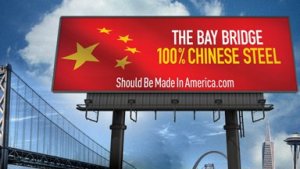 A massive and highly visible construction project that was outsourced in China is helping kick off a national "Should Be Made in America" campaign by the Alliance for America Manufacturing (AAM).

The non-profit, non-partisan group is using two large billboards positioned near the new San Francisco-Oakland Bay Bridge along with digital advertising and online activism to urge that American-made components be used for infrastructure projects financed with U.S. tax dollars. The billboards feature the flag of the People's Republic of China inscribed with: “The Bay Bridge/100% Foreign Steel. ShouldBeMadeInAmerica.com.”

“Many Californians and people all across the country are unaware that the new $7.2 billion bridge still under construction with a 2.2 mile East Span and a 525 foot-tall steel tower was made in China," said Leo W. Gerard, president of United Steel Workers (USW) International. "The consequences for American workers and California taxpayers is common sense when you consider our unemployment is too high and a major infrastructure project cuts out American steel and manufactured goods.”

The USW's Bob LaVenture said; "The foreign steel was produced and fabricated in giant steel modules that made a 22-day journey across the Pacific Ocean to be welded in place to form the most expensive project in California history. The steel manufacturing could have been done here to benefit American workers, but Caltrans and the state’s political leadership failed in their economic vision.”

AAM Executive Director Scott Paul said the goal of the "Should be Made in America" effort is to spark changes in federal, state, and local procurement policies. "We are engaging the American public with real and practical ideas about how taxpayer money should be spent on rebuilding our nation."

Paul added, “Any of our leaders willing to outsource jobs to China could find one of our billboards next to their shiny new project. We hope there isn't a great demand for our billboards, but we are prepared to put them up wherever necessary.”

The group says the Bay Bridge project was awarded to a state-owned Chinese firm by California officials, allegedly to save taxpayer money. "Although the federal government has 'Buy America' preferences for American-made materials, the state of California avoided these requirements by financing the project with state funds," according to an AAM statement.

Billions of dollars in infrastructure repairs in the U.S. are planned for the next decade. The AAM says giving the work to U.S. firms -- whenever permissible under existing trade obligations -- will effectively boost the economy.

Twenty U.S. states are currently considering, or have recently passed, legislation to provide preferences for American steel and manufactured goods in state-level procurement.