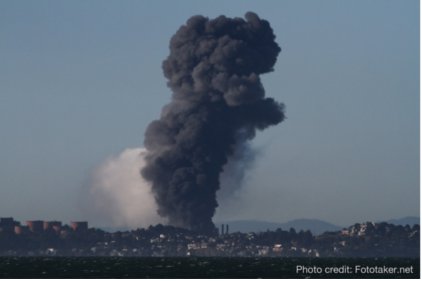 Although the photos released by the U.S. Chemical Safety Board (CSB) were taken nine miles away, the vapor cloud rising from the burning Chevron Richmond refinery is enormous.

The photos by Fototaker.net were taken on August 6 from Pier 39 in San Francisco, across the bay from the refinery.

The fire occurred when a combustible hydrocarbon liquid known as “gas-oil” leaked from an eight-inch pipe connected to a crude oil distillation tower in the refinery’s crude unit. Workers initially noted the leak and were in the process of attempting repairs on piping connected to the still-operating crude oil distillation tower when the leak suddenly intensified. Due to the high temperature of the material in the tower (in excess of 600 degrees Fahrenheit) the gas-oil immediately formed into the large flammable vapor cloud seen in the photo at left.

A number of workers were engulfed in the vapor cloud but were able to escape unharmed. 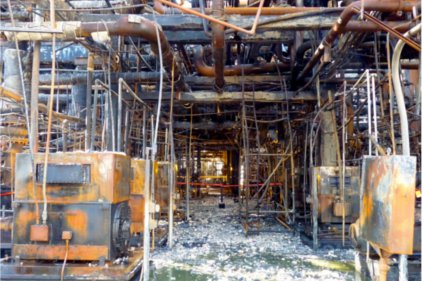 Nine residents who live near the refinery filed a lawsuit last week alleging that Chevron was grossly negligent in its handling of refinery maintenance and its emergency response to the blaze. The lawsuit says the plaintiffs are suffering from wheezing, dry heaving, seizures and breathing difficulties.

The suit asks the court to require Chevron to establish a more effective early warning system, create protocols to shut down equipment, and appoint a monitor to oversee the new protocols and equipment.

The CSB team that includes structural and industrial safety experts is in Richmond, conducting an investigation into the incident.

Click here to see more photos made available by CSB.