How Democrats, Republicans differ on worker health, safety and regs 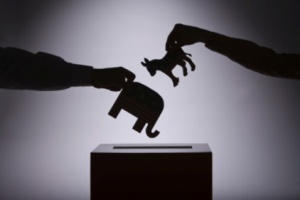 Wondering what the official Democratic and Republican Party platforms have to say about occupational safety and health? Here are the relevant references from each platform:

“Because the President and the Democratic Party believe in the right to organize and in supporting America’s workers with strong labor laws, the President rolled back harmful labor policies designed to undermine collective bargaining rights. The President appointed members of the National Labor Relations Board and National Mediation Board who understand the importance of standing up for the rights of workers.”

“His administration will continue its fight against the exploitative practice of employers fraudulently misclassifying workers as independent contractors or white-collar workers to evade taxes or deny them protections and overtime benefits. As new employment relationships evolve away from the traditional employee-employer model, we need to make sure our labor laws are modernized and keep pace with changes in our economy.”

“We will continue to fight for the right of all workers to organize and join a union.”

“Our Occupational Safety and Health Administration will continue to adopt and enforce comprehensive safety standards.”

The Democratic platform makes the following comments on regulatory policy:

“Rules should be simpler and more flexible, and regulations should be based on sound science and secure Americans’ freedom of choice.”

“But there’s no question that some regulations are outdated, unnecessary, or too costly. That’s why President Obama asked all federal agencies to review and streamline outdated regulations, an effort that will save at least $10 billion over five years, and will eliminate tens of millions of hours in annual paperwork burdens.”

“President Obama has also called for an ambitious, transparent, and unprecedented government-wide review of existing federal regulations to eliminate unnecessary rules. In response, more than two dozen agencies have released plans to streamline existing requirements. Just a small fraction of these initiatives will save billions of dollars in the near future without sacrificing consumer protections, the environment, workplace safety, or health.”

The Republican platform provides the party’s approach to regulatory reform:

“The proper purpose of regulation is to set forth clear rules of the road for the citizens, so that business owners and workers can understand in advance what they need to do, or not do, to augment the possibilities for success within the confines of the law. Regulations must be drafted and implemented to balance legitimate public safety or consumer protection goals and job creation. Constructive regulation should be a helpful guide, not a punitive threat.”

“Many regulations are necessary, like those which ensure the safety of food and medicine, especially from overseas. But no peril justifies the regulatory impact of Obamacare on the practice of medicine, the Dodd-Frank Act on financial services, or the EPA’s and OSHA’s overreaching regulation agenda. A Republican Congress and President will repeal the first and second, and rein in the third. We support a sunset requirement to force reconsideration of out-of-date regulations, and we endorse pending legislation to require congressional approval for all new major and costly regulations.”

“The bottom line on regulations is jobs. In listening to America, one constant we have heard is the job-crippling effect of even well-intentioned regulation. That makes it all the more important for federal agencies to be judicious about the impositions they create on businesses, especially small businesses. We call for a moratorium on the development of any new major and costly regulations until a Republican Administration reviews existing rules to ensure that they have a sound basis in science and will be cost-effective.”