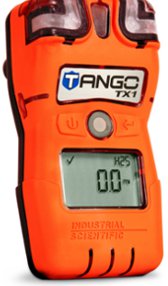 Industrial Scientific, the global leader in Gas Detection as a Service, today introduced the Tango™ TX1 single gas monitor. By wearing the Tango, workers will be the safest single gas monitor users in the world. A three-year runtime and patent pending DualSense™ Technology increases worker safety, regardless of bump test frequency, while reducing overall maintenance costs.

The Tango detects carbon monoxide (CO), hydrogen sulfide (H2S), sulfur dioxide (SO2) and nitrogen dioxide (NO2). Its revolutionary patent pending DualSense Technology includes two of the same type sensor for the detection of a single gas. The two sensor readings are processed through a proprietary algorithm and displayed as a single reading to the user. DualSense Technology was developed to address the major challenge of making sure workers are always using fully functioning, reliable instruments in the field. Until Tango, that required a bump test of the instrument before each day’s use. With Tango’s DualSense Technology, workers are exponentially safer regardless of bump test frequency.

It is powered by one replaceable 2/3 AA lithium battery that will power it continuously for up to three years even if the instrument is being used in the optional “always on” mode. After the battery can no longer support instrument life, it can be easily replaced for another three years of continuous operation. With a three-year instrument warranty, three-year carbon CO and H2S sensor warranty, and two-year warranty on the SO2 and NO2 sensors, the Tango is the most cost effective instrument on the market today.

The Tango is compatible with iNet®, Industrial Scientific’s Gas Detection as a Service solution. iNet is a software-based service that increases safety by providing visibility into gas detector alarms, exposure and usage. With iNet, customers do not have to buy gas detectors. Instead, they can subscribe to iNet and receive Gas Detection as a Service.

For more information on the Tango, visit www.indsci.com/tango.

*Based on iNet data including more than 2 million bump tests and 100,000 unique sensors.

Industrial Scientific Corporation is the world’s leading provider of Gas Detection as a Service. With more than 965 people working in 22 countries, Industrial Scientific is dedicated to eliminating death in the workplace by the end of this century. Achieving this goal requires dedication to delivering highest quality and best customer service in all transactions. Industrial Scientific also focuses on providing analysis of data from equipment use and maintenance to identify problems before they happen. Industrial Scientific has operations based in Pittsburgh (USA), Arras (France), Dortmund (Germany) and Shanghai (China). The company provides technical services to customers from local service centers around the world, and has additional offices in Australia, Bahrain, Brazil, Canada, Czech Republic, India, Indonesia, Italy, Mexico, Netherlands, Poland, Qatar, Saudi Arabia, Singapore, United Arab Emirates and the United Kingdom. Industrial Scientific is the parent company to Oldham (www.oldhamgas.com) and Predictive Solutions Corporation (www.predictivesolutions.com). For more information, visit www.indsci.com.