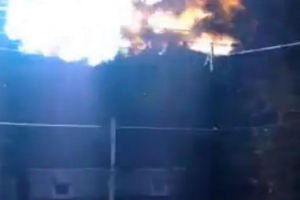 A massive fireball roared through a section of Montreal Friday, Nov. 1, sparking worldwide interest after a dramatic amateur video of the event went viral.

The fireball burned along an overhead utility line shortly after the Montreal area was battered by an intense windstorm that toppled trees and caused region-wide power outages.

Huw Griffiths — a resident of Lachine, the borough of Montreal where the fireball was spotted — captured video of the spectacular flash. It was the second such event to occur that evening, which is why Griffiths was ready to record the incident, the Montreal Gazette reports. But what, exactly, did Griffiths witness?

"This is a high-impedance arcing fault," said Massoud Amin, a senior member of the Institute of Electrical and Electronics Engineers (IEEE) and director of the University of Minnesota's Technological Leadership Institute. "It's a release of energy caused by an electrical arc."

The bright light and intense heat from an arcing fault are referred to as an arc flash. The phenomenon is similar to what happens in a lightning strike or, on a much smaller scale, the static electricity created when you walk across carpet and touch a metal doorknob: An electrical charge is diverted from one source and moves through the air to another surface.

"Electric arcs, which are similar to lightning, occur when a number of conditions are met — for example, humid weather, a branch touching a line, etc.," said Patrice Lavoie, a spokeswoman for electric utility Hydro-Québec.

"From what we can see in the video, the electric arc moves along the wires until it reaches a transformer on a distribution pole," Lavoie told LiveScience in an email. "The electric arc trips the circuit breaker — a protection device — causing the power outage in the neighborhood."

When an arc flash occurs on industrial equipment, the release of energy can be tremendous. According to a report from General Electric, temperatures can reach as high as 35,000 degrees Fahrenheit (19,400 degrees Celsius), hot enough to vaporize solid steel. The light emanating from an explosive arc blast is so bright it can cause permanent blindness.

Griffiths had to seek shelter when the arc flash moved down his tree-lined street. The arc flash was "emanating an extreme amount of heat that essentially forced us back inside, because it was so, so, so hot," he said in his video.

Estimates vary widely, but Chicago-based research firm CapSchell has determined that arc-flash accidents kill or injure five to 10 U.S. workers every day. However, Amin cautions that such estimates may be high. Still, the costs of an arc blast and the resulting healthcare expenses and legal fees can add up to "millions of dollars per incident," Amin told Live Science.

Though they're rarely captured on video, incidents like the arc flash that moved through the Montreal suburb  aren't uncommon. "It's not an isolated phenomenon," Amin said, adding that this and other events — including Hurricane Sandy— provide compelling evidence that aging electrical infrastructure is in serious need of modernization.

"We take our electrical power network for granted," Amin said, "even though it underpins our economy and our quality of life." Amin has repeatedly called for increased U.S. investmentin "smart grid" electrical technologieswith greater resilience and reliability, including "self-healing" abilities in the event