We knew it helped make us fat, but in a study released recently by the Centers for Disease Control & Prevention (CDC), excess sugar is also blamed for significantly increasing our risk of death from heart disease.

The study focused on refined sugar, which is found in non-diet soda, cakes, cookies and candy.

"The risk of cardiovascular disease death increases exponentially as you increase your consumption of added sugar," says the study's lead author, Quanhe Yang, a senior scientist with the CDC.

Yang and his research team reviewed data from more than 31,000 people who participated in the National Health and Nutrition Examination Survey, which evaluates dietary habits based on in-person interviews.

The more sugar you eat...

Among their findings, which were published online on February 3, 2014, by the Journal of the American Medical Association:

• People who consume seven or more servings a week of sugar-sweetened beverages are at a 29% higher risk of death from heart disease than those who have one serving or less.

Rachel Johnson, a spokeswoman for the American Heart Association and a nutrition professor at the University of Vermont, says, "Now we know that too much added sugar doesn't just make us fat, it increases our risk of death from heart disease.” 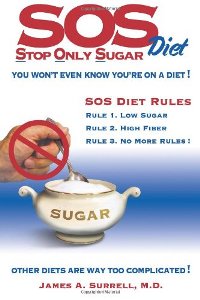 James A. Surrell, M.D., a Michigan-based physician, wasn’t surprised by the results of the CDC study. He’s been an anti-sugar crusader for decades.

“There is way too much sugar added to our food and drinks available today, including non-diet soft drinks, candy, cookies, cakes, fruit drinks, and many other items as well,” said Surrell. He advises people to read food labels and avoid purchasing items with a high sugar content. “As scientifically noted by the CDC and AMA, these added sugars are very, very unhealthy.”

Surrell has published a book on the subject, “SOS (Stop Only Sugar) Diet,” which advises people to follow a simple strategy: low sugar, high fiber.

“To lose weight and keep it off what you need to do is become a label reading detective,” said Dr. Surrell. “With a little practice you will learn to identify healthy and unhealthy foods and drinks by identifying low sugar and high fiber.