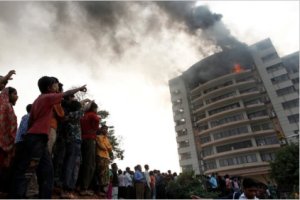 In his Wednesday AIHce 2014 General Session address at the Henry B. Gonzalez Convention Center, Scott Nova, the executive director of the Worker Rights Consortium in Washington, D.C., detailed the hazardous working conditions in the garment manufacturing industry, particularly in Bangladesh, where economic and political pressures have exacerbated longstanding safety problems to a greater extent than in other countries.

According to Nova, three of the four worst workplace tragedies in this particular industry have occurred during the last two years. Two of these disasters, the Rana Plaza building collapse in April 2013, which resulted in more than 1,100 fatalities, and the Tazreen factory fire in December 2012, which killed 100 workers, occurred in Bangladesh.

Nova described how underlying the worker safety problem in global apparel factories are economic conditions that have led to ruthless competition. The majority of garment manufacturing is done by workers in low-wage countries. Factories are mostly contract suppliers who have short-term relationships with global apparel brands. A typical contract lasts until a specific order is fulfilled, and factories have no guarantees that they will receive a new contract. Hence, factory owners have little leverage to compete for contracts other than lowering their employees' wages—apparel workers in Bangladesh make the U.S. equivalent of 31 cents an hour.

The cheapest place in the world

“It is the rock-bottom cheapest place in the world to make a shirt or a pair of jeans,” said Nova.

Today is the last day of AIHce 2014, which attracted approximately 5,000 industrial hygienists and other occupational safety and health professionals from all over the world to San Antonio for the first time. AIHce is sponsored by the American Industrial Hygiene Association (AIHA) and the American Council of Government Industrial Hygienists.