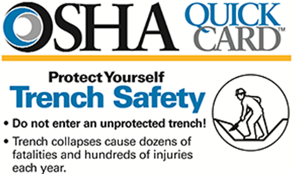 Gershenson Construction Co. Inc. of Fenton, Mo. has been cited by OSHA after a worker suffered a broken vertebra when he was struck by a partially suspended load of sewer pipe and knocked to the bottom of an unprotected 13-foot-deep trench. OSHA has cited the company for 11 safety violations, including one willful and 10 serious, for failing to protect workers from struck-by and trench cave-in hazards. Proposed penalties total $110,400.

Being struck-by vehicles and other objects is a leading cause of construction-related injuries and deaths.

The employee was struck-by one end of a 12-foot-long section of sewer pipe being maneuvered by an excavator. The impact caused him to fall to the bottom of the 13-foot-deep trench. Two other workers were actively working inside the unprotected trench to install a new sewer system at the Riverside & Yarnell Sanitary Relief Sewer construction project, near the intersection of Henderson and Larkin Williams Roads in Fenton. The trench lacked required safeguards to prevent the walls from caving in and seriously injuring workers.

OSHA issued one willful violation to Gershenson Construction Co. for failing to ensure workers were protected from cave-in hazards while working in a trench that exceeded a depth of 5 feet. OSHA standards mandate that all excavations 5 feet or deeper be protected against collapse. Detailed information on trenching and excavation hazards is available.

Ten serious violations were issued for exposing workers to the hazards of being struck-by a partially suspended load; lack of adequate and frequent inspections of the work site for hazards; inadequate training of employees; lack of head protection; use of damaged rigging equipment; lack of permanently affixed legible identification markings on rigging equipment; and allowing an excavator to operate within 10 feet of energized, overhead power lines.

Other violations involved trenching standards, such as allowing exposed and unprotected gas and water lines in a trench, and failing to remove workers from a trench until necessary precautions were taken to ensure their safety.