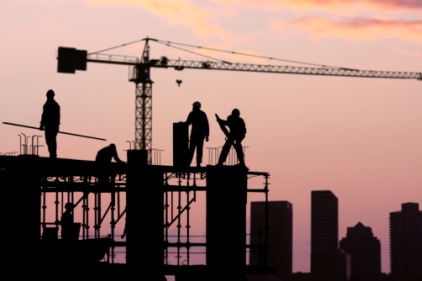 This past Sunday’s The New York Times Magazine (9/4) ran a cover story on “Where Steel Meets Sky,” about the workers rebuilding Manhattan’s skyline with the construction of the One World Trade Center skyscraper. In mid-August construction had reached the 70thfloor, 1,000 feet up. The scraper will top out at 104 floors, with a total height of precisely 1,776 feet.

Few jobs quite literally balance safety with risk-taking like walking a narrow steel beam 1,000 feet in the sky. The article opens with a black and white photo of a fifth-generation ironworker, with hard hat, wraparound safety shades, fall protection lanyard and long gloves, a thickset, bearded man, delicately walking across a beam, both arms outstretched for balance, one foot in front of the other, with a panoramic view of the Manhattan skyline far below him.

“You need to have a very unique trait inside, to go running out on the iron,” he says. “You have to be able to block out how high up in the air you are.”

The skywalkers need to be in shape. “Everything you pick up is heavy. There’s nothing light up there,” says a 51-year-old ironworker. You can’t be overweight and walking those beams. “You don’t see many fat boys up on the steel, that’s for sure,” he says.

You have to have very fast reflexes. Agility and flexibility. And pure and simple strength. Something like muscular buffed and ripped ballet dancers in steel-toe work boots.

Skywalkers also balance being smart, headstrong, safe, and a little crazy, as one says. They’re all a little wild, or a lot wild, says another.

OK, wild, but also possessing the keen mental focus of a surgeon, say. It is a unique combo. “If you’re scared, go home,” says one. “You’re going to either hurt yourself or somebody else bad.”

For one thing, skywalkers are part of a small, tight brotherhood. “You’re in your own little world up there,” says one. “You’re up there with other men who enjoy what you’re doing.”

Then there is the rush. “Some people jump out of helicopters and parachute — my rush is from walking on a beam. That’s where I get my adrenaline,” says one ironworker.

Many have the work in their DNA, being fourth- or fifth-generation ironworkers. Skywalkers erecting One World Trade Center have fathers and grandfathers who built the World Trade Center twin towers in the early ‘70s. They were brought to the site as kids.

Skywalkers have the compulsion to go where most people won’t go and see what most people will never see, as the article points out. Like firefighters, combat photographers, police, physicians and nurses, EMTs, deep sea fishermen, fighter pilots, foot soldiers, submariners, heck, even taxi cab drivers.

America is mired in some post-industrial age malaise. “We don’t make anything in this country anymore,” is the lament. Don’t tell that to the skywalkers.