This website stores data such as cookies to enable important site functionality including analytics, targeting, and personalization. View our privacy policy.
Home » Blogs » Thought Leadership » No calls, no texting behind the wheel? I'll go out of business!

No calls, no texting behind the wheel? I'll go out of business!

You’re telling me, no calls, no texting, no email behind the wheel! No hands-free headset even? Then what was the point of those things?

I’m going to go out of business. Who is dictating my demise?

The National Transportation Safety Board? On December 13?

What that’s? This is only a recommendation? The NTSB wants all 50 states to ban the use of any type of personal electronic device while driving, a nationwide ban, is that right?

Those DC bureaucrats are chained to their cubicles, you know, so they can’t wander around in the real world. I swear. They are so cut off from reality. They don’t get it. In the 21st century your car is your office, or one of your offices.

Listen, I’m on the road selling every week. I’m in the car every day, for hours and hours. Now if NTSB gets its way I won’t be able to call or text or email my office, my customers, my boss all those hours I’m in a car. Talk about lost productivity, there goes my productivity, out the damn car window.

Hell, no call, no text, no email… I will not know what’s going on in the world, or at least in my business world. No emails? I’m lost. Doomed. You cannot live without email.

What’s that? More than 3,000 people lost their lives in distraction-related accidents last year, eh? In one case a pickup driver who caused two school buses to crash had sent and received 11 text messages in the 11 minutes before the crash, is that so?

Well, still, this is classic, world-class regulatory overkill. Those bureaucrats in DC, what do they know? They all commute to work on the Metro. Let’s see them hump the interstates like I do all week selling for a living and do without any calling or texting or emailing. How do I confirm appointments? Schedule calls? Check my messages? Change flights? Talk to my team? Say goodnight to my kids? I am supposed to drive 4-5-6 hours a day and just stare out the window, talking to myself. I’ll go nuts. Driving for hours thinking about the business I’m losing. Dammit, this is even interfering with my parenting. I always call my kids before they go to bed.

There goes Washington, sticking its nose in places it shouldn’t be sniffing. 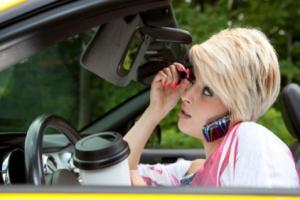 What’s that you say? Research shows about half of American drivers between 21 and 24 say they have thumbed messages or emailed from the driver's seat. Yeah, that’s easy to believe. Texting is mostly a kid thing, teenagers. Mostly a social thing. Washington doesn’t get it.

What’s that? At any given moment last year nearly one in every 100 drivers was texting, emailing, surfing the Web or otherwise using a hand-held electronic device, and that number is up by 50 percent from the year before? Listen, I’ll be honest with you, I squirm a little when I’m a passenger in a car and the driver is texting or on the phone. I do feel unsafe.

In fact, I can’t stand being in the car with one of my kids driving and texting, so I won’t allow it. Yeah, I ban it. But that’s family. I’ve got to do what I’ve got to do to make a living. Which means call, text and email from the road.

This calls for drastic resistance. I’m going to organize a protest. What the hell, everyone is protesting about something these days. A bunch of my sales buddies will drive to Washington. Remember when truckers did this years ago to make their point? We’ll have hundreds, maybe thousands of sales reps in car rentals, all silver, cruising up and down and around the Mall. Can you picture it?

Then, this is the kicker. We’ll show the regulators distracted driving. Guys will be driving and eating Subway subs, with lettuce and mayo falling all over ‘em. Guys will be driving and reading maps. “Damn those tiny highway numbers, says the Baby Boomer with  bad eyes. Guys will be leaning in, squinting at a GPS, reading the sports page, turned around to the back seat trying to find a CD. They be driving and blasting CDs, Ozzy Osbourne, yeah, Metallica, heavy metal, distracting as hell. We’ll put two reps in the same car and have them shout and scream at each other in a fight. Reps have been arguing in cars for 100 years.

One time I was making calls with another rep on election day. We got into a huge fight  about who should be president. The rep driving got so caught up, so upset in not being able to “sell me” his candidate, at one piont he stopped the car with a jerk and said, “You’ve got me so steamed I’m completely lost. Do you know where we are?”

Nothing electronic about that at all.

So what are the feds going to do? Ban eating in cars? Ban CD playing? Limit the number of passengers? No infants, they’re damn distracting, that wouldn’t be a bad rule. No political or religious debates. I can live with that. No fiddling with the radio? Ban back-seat driving? That’s one good thing that could come out of this travesty.

Look, I understand the danger of distracted driving to kids. And this kind of electronic ban should apply to anyone under 21. Like drinking.

But working adults. You can’t throw us back to the 1950s. Just wait til you see thousands of silver rentals clogging up the Mall and scaring everyone with perfectly legal distracted driving. Then what will the feds say?