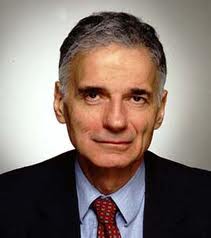 Almost a half century (47 years) after publication of the book Unsafe at Any Speed, which uncovered auto companies unwillingness to spend money on safety features — Ralph Nader has a new organization in his sights as he pursues safety issues — the AFL-CIO. The union hasn’t done enough to pressure the White House on workplace safety issues, Nader claims..

“Obama spends more time figuring out bracket wins in the NCAA basketball tournament than he spends thinking about OSHA," says the 78-year-old. "This is the fault of organized labor, they haven’t forced it into the political arena.”

Nader claims that Cass Sunstein, who heads up the Office of Information and Regulatory Affairs within the OMB, has blocked many regulations out of fear that they would hurt industry. “They appointed an excellent person to run [the Occupational Safety and Health Administration]—David Michaels. The person, though, who is really running OSHA is Cass Sunstein,” Nader says. “It’s designed to be fairly independent, and it’s become a puppet of OMB.”

Many workplace safety advocates have been disappointed with progress by OSHA under President Obama. The implementation of two major rule changes — which would limit worker exposure to carcinogenic silica dust and prohibit children from working in dangerous farm occupations — has been significantly delayed by the Office of Management and Budget, the federal agency that oversees and gives final approval to any regulatory changes.

Nader says that he’s frustrated after having talked with AFL-CIO President Richard Trumka and his staff about pushing Obama more on workplace safety.

“He’s very good when you talk to him in private, but it’s in the doing. When you talk to [the AFL-CIO] they talk tough. It seems like you are talking to Eugene Debs,” says a frustrated Nader.

Recently, Nader sent AFL-CIO President Richard Trumka an open letter urging him to critique the president more strongly on a number of areas, from workplace safety to raising the minimum wage.

“Their performance is pretty lackadaisical. Publicly, they endorse Obama with no quid pro quos. The only promise was one way — $400 million from the AFL-CIO [to support the president's re-election campaign]. He’s got them in their pocket and he knows it,” says Nader.

"Unfortunately Ralph Nader seems more intent on holding on to his celebrity by publicly criticizing others rather than quietly committing to doing the work necessary to rebuild a better country for everyone," says AFL-CIO spokeswoman Allison Omens. "We wish him luck in his endeavors”

Nader says OSHA's lethargy under the Obama administration is symptomatic of a deeper problem: organized labor being too captive to the Democratic party.

“Without the AFL-CIO and labor, [Obama] wouldn't be president. If they signal to them that they can be taken, labor will be taken. This nowhere-to-go syndrome is destroying the whole left political spectrum completely. All the GOP has to do is get worse and the Democrats get worse, because that’s where the money is,” Nader says.