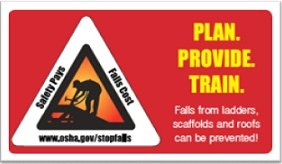 The company was cited for similar violations in 2013. Bosco Custom Homes has not provided OSHA with documentation to prove it fixed hazards identified in a previous inspection, and has not paid any portion of the $17,200 in penalties.

"Bosco Custom Homes has failed to fix safety hazards related to falls. This shows an inexcusable and deliberate lack of care for the safety and health of the company's employees," said Jake Scott, OSHA's area director in North Aurora. "Falls remain the leading cause of death in the construction industry, and allowing construction workers to be exposed to fall hazards without fall protection is unacceptable."

High in the air

An OSHA inspector observed eight employees engaged in framing operations on a ranch home under construction on April 30, 2014, in Elgin. The workers were constructing rafters high in the air and were not provided a recommended means of fall protection, such as guardrail systems, safety nets, warning-line systems or personal fall arrest systems. The workers were exposed to falls in excess of 11 feet.

Bosco Custom Homes was cited for one willful violation for failing to provide fall protection at each of these work sites.

The company was cited for seven repeat violations for failing to provide protective helmets and fall protection training and improper use of an extension ladder. OSHA issues repeat violations if an employer was previously cited for the same or a similar violation of any standard, regulation, rule or order at any other facility in federal enforcement states within the last five years. Bosco Custom Homes was cited for similar violations in March 2013 at work sites in Plainfield and Naperville and in October 2013 at a work site in Elgin.

OSHA has created a Stop Falls Web page at http://www.osha.gov/stopfalls with detailed information in English and Spanish on fall protection standards. The page offers fact sheets, posters and videos that vividly illustrate various fall hazards and appropriate preventive measures. OSHA standards require that an effective form of fall protection be in use when workers perform construction activities 6 feet or more above the next lower level.

OSHA's ongoing Fall Prevention Campaign, which was started in 2012, was developed in partnership with the National Institute for Occupational Safety and Health and NIOSH's National Occupational Research Agenda program. The campaign provides employers with lifesaving information and educational materials on how to plan to prevent falls, provide the right equipment for workers and train employees to use that equipment properly.