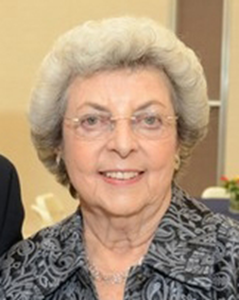 According to Kusnetz, she became interested in the industrial hygiene profession 64 years ago when she married her husband Howard L. Kusnetz, CIH (Ret), CSP (Ret), who served as the 47th president of AIHA in 1985-1986.

“I watched as generations of certified industrial hygienists came onto the scene and AIHA assumed a leadership role in guiding the profession into the future," Kusnetz said. "These dedicated scientists worked all over the world to prevent workers from becoming ill and dying from their work environments. Now I am an honorary member. One may stress the word ‘honorary,’ but I will stress the word ‘member.’ I am proud to be part of AIHA.”

In 1987, Kusnetz and her husband established an award that recognizes outstanding younger industrial hygienists who show leadership in the profession. The Kusnetz Award is presented each year at AIHce to a certified hygienist under 40 years of age who is currently employed in the private sector; who by exhibiting high ethical standards and technical abilities has provided for the highest standards of health and safety protection for the employees for whom he or she is responsible; and who shows promise of leadership in the industrial hygiene profession.

“Florence was instrumental in setting up the Kusnetz Award and has continued to be its guiding force over many years,” said AIHA President Christine A.D. Lorenzo, CIH. “AIHA is truly privileged to have Florence join its esteemed honorary member circle, and we look forward to celebrating this achievement at AIHce 2015.”

Founded in 1939, the American Industrial Hygiene Association (AIHA) is the premier association of occupational and environmental health and safety professionals. AIHA’s 10,000 members play a crucial role on the front line of worker health and safety every day. Members represent a cross-section of industry, private business, labor, government and academia.

"IH is a team sport"