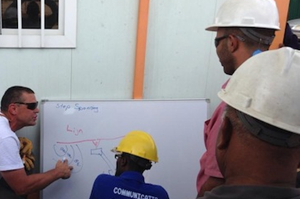 Portland, Ore., lineman Kurt Shriver, who traveled to the South American nation of Suriname in October to help launch a new safety training program for linemen, knew he was bringing knowledge that was sorely lacking. But the International Brotherhood of Electrical Workers (IBEW) Local125 member was still surprised at conditions faced by workers at EBS, the state-run utility.

Going back in time

“It was almost like we went back in time over 80 years to when apprenticeships were just being established,” says Shriver, whose trip was sponsored by the Suriname American Brotherhood Initiative, founded last year by Seattle Local 77 lineman Brady Hansen. “The trip was one of the high points of my career,” says Shriver. “It was awesome to know that we were sharing skills of the trade and helping linemen stay safe at work to return home and be husbands and fathers.”

In  a story in the August 2014 issue of The Electrical Worker, “Seattle Lineman Champions Improved Training in Suriname,” Hansen described the founding of the initiative, a volunteer effort to send IBEW linemen to Suriname to help bring the nation’s training of linemen up to world standards, no matter how long or difficult the journey.

A lead instructor at Avista’s Spokane Lineman School, Hansen was helping guide a 2013 tour of visitors from Suriname through the school’s pole yard and classrooms when he was taken aback that the training and safety protocols and equipment that IBEW members linemen take for granted in North America appeared to be mostly absent in the small nation. So he arranged a visit to Suriname and proposed that company officials sponsor a formal program to help enrich and extend lineman training in the nation.

The volunteers arrived in South America with climbing belts, harnesses and hooks they had collected in conjunction with Recycling for Linemen. Nearly $15,000 worth of equipment was provided by Stellar Industries.

‘It was awesome to show Surinamese linemen the skills of the trade that were handed down to us,’ says Portland, Ore., Local 125 lineman Kurt Shriver.

Working in a jungle

Hansen told Local 1245’s Utility Reporter he and other linemen wept when Surinamese linemen showed them the scars they have suffered on the job that reminded them of harrowing stories from the early days of electrification in the U.S.

Challenges facing the South Americans were exposed even more dramatically when volunteers accompanied them to the dense, wet rainforest where tree trunks often serve as utility poles. Hansen told the Utility Reporter:

The only equipment they have is a boat and a four-wheeler and they maintain miles and miles of feeder along a river. They have to drag a 30-foot ladder around through the jungle; it’s no wonder so many of them have back problems.

“The Surinamese linemen were extremely intent learners,” says Hansen. As the volunteers instructed them in wood pole climbing in a just opened, but still rudimentary pole yard, Hansen said EBS linemen took out smart phones and began taking pictures. Classes that were scheduled for two hours went nearly an hour over as questions were asked and answered.

“They are a good bunch of guys,” says Baker, an eight-year IBEW member who works for his county utility department. “They have always done their jobs and kept the lights on with little tools and training, making do with what little they have.”

To demonstrate pole-top rescues, volunteers and students improvised, filling a pair of coveralls with sand to make a suitable dummy. Classes included conductor tying, how to work around cutouts and transmission changeovers. Linemen asked questions in the Creole language Sranan Tongo or Dutch, with translators on hand to smooth communication.

“We wanted our workers to increase their safety awareness, but what was learned went beyond,” says Melati K.A. Abas-Djamin, human relations development manager at EBS. “Learning from and with each other has not only broadened one’s perspective, but shows that brotherhood goes beyond borders,” says Abas-Djamin.

“I believe Suriname is readying for making a quantum leap in safety,” says Hansen. “Linemen are developing new neural pathways and new paradigms, developing a real safety culture.” And the bonds between workers in two nations will deepen.

“It was cool to just stand shoulder to shoulder with our Surinamese brothers. We speak different languages, we live a world apart, but at the end of the day, after a boat trip in the rainforest, we were all fishing together and teasing each other about not catching anything,” he says.

YouTube and Facebook, Hansen said, provide a new network to help electrical workers across the world, the same kind of network that helped the founders of the IBEW to spread their concept of brotherhood on a national scale,” says Hansen, who is planning to take another team to Suriname in the next six to eight months.

Hansen says Surinamese lineman talked often about injuries they sustain working in low-voltage systems within their lines. He asks IBEW linemen to donate low-voltage secondary gloves to carry with him on his next visit.