Not an Accident: Preventable Deaths 2015 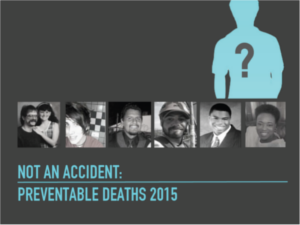 In observance of Worker’s Memorial Day tomorrow, the National Council for Occupational Safety and Health (National COSH) has released its annual report on U.S. worker fatalities: Not an Accident: Preventable Deaths 2015.

The database, a comprehensive effort to gather specific information about workplace deaths, covers some 1,500 fatalities – about one-third of all workers who died on the job in 2014.

The report notes that not one of these death was an accident, because the hazards involved (trench cave-ins, unguarded machines and falls) are well known, and there are standards in place for preventing these kinds of fatalities.

A meteor landing in your living room

“An accident is an unpredictable event, difficult if not impossible to prevent – like when a meteor lands in your living room. Workplace deaths, unfortunately, are much less rare than meteors. They are also much more predictable. Decades of research and practice in workplace safety and health have identified the most common workplace hazards – and proven strategies for prevention. If employers were to implement these strategies more consistently and effectively, thousands of workers who have died on the job would be alive today.”

In 2013, 4,585 workers died due to unsafe working conditions, according to the most recent data available from the U.S. Bureau of Labor Statistics (BLS). Epidemiological studies estimate that an additional 50,000 people die each year from long-term exposure to workplace hazards such as asbestos, silica and benzene.

“These deaths are also preventable,” according to the report. “Engineering controls and product substitution can significantly reduce worker exposure to hazardous materials.”

With a nine percent increase in sudden workplace fatalities between 2012 and 2013, Hispanic workers are at greater risk than other workers. Fatality rates decreased for African-American, Asian and white workers during the same time period.

Also at higher risk: temporary or contract workers who had 749 deaths from sudden events in 2013, sixteen percent of the U.S. total.

The report shows that as in previous years, agriculture, fishing and forestry remains the most dangerous sector of the U.S. economy, with a death rate of 23.2 workers for every 100,000 employees.

Of the 54,000 deaths from occupational accidents and illnesses, only two employers were prosecuted for recklessness or negligence: film director Randall Miller, who pled guilty to involuntary manslaughter for the death of camera assistant Sarah Jones, and former Massey Energy CEO Don Blankenship, who is scheduled to go on trial in July of this year for conspiracy to violate mine safety laws, which led to the 2010 Upper Big Branch Mine tragedy that killed 29 miners.

Workers’ Memorial Week, a remembrance of those who have lost their lives at work is observed nationwide – and around the world – by surviving family members as well as health and safety activists in workplaces and communities. It coincides with the anniversary of the U.S. Occupational Safety and Health Act, which took effect on April 28, 1971.

Fatal plane crash caused by an accident, not “hostile acts”

Deaths at corn mill were caused by preventable hazard

Why every accident is preventable