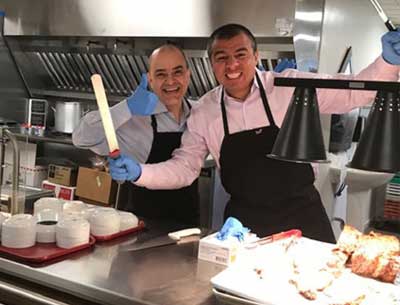 The Four Seasons Hotel Houston is not just a luxury hotel that includes premiere restaurants, a health club and spa and, of course, guest rooms. It is also the first hotel to be federally certified VPP Star – a milestone in the hospitality industry. It accomplished that status through a combination of creative activities (i.e. “VPP Jeopardy,” an improved Injury and Illness Prevention Program (I2P2), and the creation of an Injury Prevention Committee.

"It's incredible that Four Seasons Houston is the first hotel in the hospitality industry under federal OSHA to achieve VPP Star; you guys did an incredible job and we are very impressed,” said South Houston’s OSHA Area Director. “I can feel the pride and excitement for the work you've done and will continue to do.

The facility’s journey to the certification began in 2016, when its Planning Committee, led by General Manager, Tom Segesta. committed to achieving VPP Star status. The committee felt that ongoing participation in the program would drive safety excellence, reduce injuries among its 400 workers, increase both employee and management engagement and prevent the safety program from plateauing or getting stale.

"Our team is dedicated to proactively creating and maintaining a safe and healthy work environment at all times, which not only benefits our employees, but our valued guests, as well," said Tom Segesta, General Manager of the hotel.

The Four Seasons says its efforts helped close gaps and gain a better understanding of safety expectations in the hotel industry.

What Four Seasons Hotel Houston did:

VPP Star has helped drive exemplary injury and illness rates at the site. The Total Case Incident Rate (TCIR) in 2018 was 1.0 - 77% better than the industry average and the 3-year TCIR of 1.42 is 68% better than the National Average. On April 26, 2019 the site surpassed 288 days without a recordable injury. This milestone was celebrated by all employees and included leadership serving a congratulatory lunch. Pictured above at VPP Star Award Ceremony (Left to right – Tom Segesta (General Manager), Bill Dembski (Director of Engineering), Sylvester Turner (Houston Mayor), Bryan Francis (Director of Security and VPP Champion).

Its I2P2 has helped the site achieve a safety system that is based on proactive activities and processes and have helped reduce the number and severity of injuries and illnesses at the property. It includes systematic programs that allow employees and management to collaborate on an ongoing basis to find and fix workplace hazards before workers are hurt or become ill.

The Four Seasons Houston says it's providing the kind of mentoring and support that it received from veteran VPP Star site, Cedar Bayou Power Plant to other hospitality industry facilities, including several Four Seasons properties that are preparing for future VPP assessments.