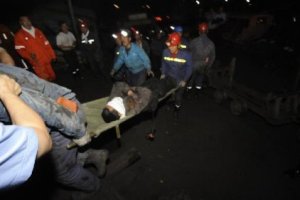 Twenty-two of the coal miners trapped in a flooded mine in northeast China since August 19 have been rescued, according to a statement released by the vice governor of the province where the illegal mine is located.

The flooding occurred after workers mistakenly drilled into a neighboring mine. Of the 45 miners who were working in a pit of the Hengtai Coal Mining Co. in the Inner Mongolia Autonomous Region, nineteen managed to escape.

The official Xinhua News agency said rescuers drained 56,150 cubic meters of water, cleared silt and drilled a hole 920 feet deep to supply ventilation to the men. The narrowness of the tunnel frustrated their efforts to locate and rescue the miners quickly.

Three miners are still missing. At least one survivor is hospitalized.

The provincial government ordered the mine to stop production in 2007, but the owner restarted production without permission on Aug. 16, according to the local work safety bureau. Police have arrested the mine's legal representative and owner for suspected cover-ups.