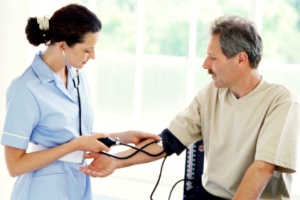 An increase or decrease in your blood pressure during middle age can significantly impact your lifetime risk for cardiovascular disease (CVD), according to research in Circulation: Journal of the American Heart Association.

Using data from 61,585 participants in the Cardiovascular Lifetime Risk Pooling Project, researchers examined how changes in blood pressure during middle age affected lifetime CVD risk. Previous studies had considered a single measurement at a given age. In this study, age 55 was considered a mid-point for middle age.

Starting with baseline blood pressure readings from an average of 14 years prior, researchers tracked blood pressure changes until age 55, then continued to follow the patients until the occurrence of a first cardiovascular event (including heart attack or stroke), death or age 95.

“Taking blood pressure changes into account can provide more accurate estimates for lifetime risk of cardiovascular disease, and it can help us predict individualized risk, and thus, individualized prevention strategies,” said Norrina Allen, Ph.D., lead author of the study and assistant professor in the Department of Preventive Medicine at the Northwestern University Feinberg School of Medicine in Chicago. “Both avoiding hypertension during middle age or delaying the onset of the development of hypertension appear to have a significant impact on an individual’s remaining lifetime risk for CVD.”

“Since the data suggests that both early elevations and changes over time in blood pressure measurements impact the future risk of CVD, people can take preventive steps early on to reduce their chances of heart attack or stroke,” said Donald M. Lloyd-Jones, M.D., Sc.M., co-author of the study and chair of the Department of Preventive Medicine at the Northwestern University Feinberg School of Medicine.

“Maintaining a healthy diet, combined with exercise and weight control, can help reduce blood pressure levels and, consequently, your risk for CVD later in life.”