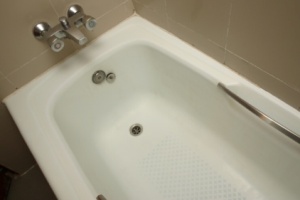 Both OSHA and NIOSH have issued warnings regarding the risk for death from bathtub refinishing using methylene chloride strippers.

Methylene chloride is a highly volatile, colorless, toxic chemical that is widely used as a degreaser, process catalyst, and paint remover. It is metabolized to formaldehyde and carbon monoxide and is categorized as a carcinogen (8).

From a Centers for Disease Control statement: "To use products containing methylene chloride safely, work areas must be well-ventilated, and when levels of methylene chloride exceed exposure limits even after implementation of engineering and work practice controls, workers must use respiratory protective equipment, such as tight-fitting, full-face, supplied-air respirators. OSHA's standard for methylene chloride, which was promulgated in 1997, covers all occupational exposures to the chemical (e.g., general industry, shipyard employment, and construction). The standard mandates that air monitoring, medical surveillance, hazard communication, and personal protective equipment be in place where methylene chloride is used."

Methylene chloride is absorbed mainly through inhalation, although it can also be absorbed through the skin. To protect against skin absorption, butyl rubber or polyvinyl alcohol gloves (not latex gloves) must be worn.

The investigation began in Michigan in 2010, where the state's Fatality Assessment and Control Evaluation program conducted an investigation into the death of a bathtub refinisher who used a methylene chloride–based paint stripping product marketed for use in aircraft maintenance.

Two earlier, similar deaths in Michigan were identified and the state notified the CDC, which in turn notified OSHA, which subsequently found ten other bathtub refinisher fatalities associated with methylene chloride stripping agents that had been investigated in nine states during 2000–2011. Each death occurred in a residential bathroom with inadequate ventilation. Protective equipment, including a respirator, either was not used or was inadequate to protect against methylene chloride vapor, which has been recognized as potentially fatal to furniture strippers and factory workers but not to bathtub refinishers.