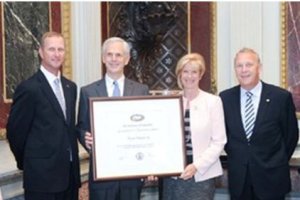 Pelican Products has been awarded the Presidential “E” Award for Exports by U.S. Department of Commerce Secretary, John Bryson, at the White House in Washington, D.C. The “E” Awards are the highest recognition any U.S. entity may receive for making a significant contribution to the expansion of U.S. exports.

Pelican’s President and CEO, Lyndon Faulkner and COO, John Padian were on hand to receive the award. Congresswoman Janice Hahn, who represents the 36th Congressional District (which includes the company's Torrance, California corporate headquarters), was also in attendance.

“Pelican takes pride in selling high-quality products in every corner of the world and most importantly, helping to create good jobs for American workers,” said Lyndon Faulkner, Pelican Products’ President and CEO. “We’re honored to receive the President’s “E” Award, and feel it reflects Pelican’s continued commitment to its export business.”

Pelican Products is the global leader in the design and manufacturing of both high-performance case solutions and advanced portable lighting systems. With its roots in the military and tactical fields, Pelican has spent the last few years translating its design of virtually indestructible cases into new consumer products - marking a huge leap in the company’s continued innovation and product direction.

“I am pleased to recognize Pelican Products for receiving the President’s “E” Award, which honors companies that make significant contributions toward increasing U.S. exports,” said U.S. Commerce Secretary John Bryson. “This Administration is committed to leveling the playing field for American businesses and workers to help U.S. companies build things here and sell them around the world. “E” Award winners like Pelican Products have excelled in this effort, demonstrating four years of successive export growth. It is companies like this that are helping to grow our economy and put more Americans back to work.”

A business client of the Department’s U.S. Commercial Service, Pelican Products has benefited from export counseling, trade shows, market research, and business matchmaking to greatly expand its export sales. While Europe represents a significant portion of the company's foreign market sales, the firm does business in several other regions of the world as well.

U.S. companies are nominated for the “E” Award through the U.S. Commercial Service office network in 108 U.S. cities and more than 75 countries which helps U.S. companies export. The primary criterion for the “E” Award is four years of successive export growth or of supporting the export growth of others. “E” Awards are awarded to applicants that can demonstrate a significant contribution to U.S. export expansion that is measurable, innovative, sustainable, and has broad impact.

All nominations are reviewed by the “E” Award Committee, which is chaired by the Department of Commerce, and includes representatives of Ex-Im Bank, the Small Business Administration, and the Departments of Agriculture, Labor, State, and Transportation.

A total of 41 U.S. companies and organizations were presented with the “E” Award at the May 17, 2012 World Trade Week ceremonies in Washington, D.C.

Pelican Products, Inc. is the global leader in design and manufacture of both high-performance protective case solutions and advanced portable lighting systems. Their products are used by professionals in the most demanding markets including firefighters, police, defense / military, aerospace, entertainment, industrial and consumer. Pelican products are designed and built to last a lifetime. The company operates in 19 countries, with 26 offices and five manufacturing facilities across the globe. For more information, visit www.Pelican.com or www.behrmancap.com.