Serious injuries and fatalities (SIFs) have become a passionate focus for Tom Krause, Ph.D., co-founder of the consultancy BST. At the ASSE Denver meeting, he presented an educational session updating safety pros on prevention efforts.

Serious injuries are life-threatening (such as significant loss of blood, trauma to vital organs, and damage to the brain or spinal cord), or life-altering (resulting in permanent or long-term impairment of loss of an internal organ, body function, or body part.) 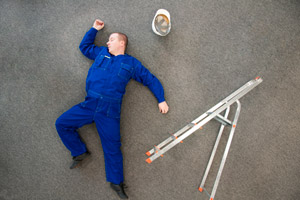 According to Krause, “this disturbing trend is found at the national, industry, and organizational level. It has galvanized organizations with OSHA recordable injury and illness rates that are already low; very low in some cases. Seven global companies supported by Mercer ORC Networks and BST pooled their data to study this trend, identify its sources, and recommend strategies to prevent serious injuries and fatalities (SIF).

“Said Steve Newell, a consultant with Mercer ORC Networks: ‘“It is clear traditional approaches to safety and health are not working. No matter how low its OSHA recordable rate, no organization can define itself ‘best in class’ or ‘world class’ if it continues to experience SIFs’.”

H.W. Heinrich’s 80-year-old safety triangle is not predictive, for example. Not all injuries have SIF potential. Reducing injuries at the bottom of the triangle (minor injuries) does not assure a reduction of SIFs at the top of the triangle, according to Krause.

“In 2011 the Mercer ORC/BST study group released findings showing the causes and correlates of SIFs are usual different than those of less-serious injuries, and the potential for SIF events is low for about 80 percent of non-SIF injuries. About 20 percent of recordable injuries have the potential to be SIFs,” according to Krause.

“OSHA data, while of value, should not be the sole or primary metric for driving and assessing safety performance,” he says. “The long-standing assumption that most injuries result from unsafe acts, fueled and reinforced by flawed incident investigations, is incorrect and unsupported. These beliefs are proving to be over-simplified, inaccurate, and often downright harmful.

“Still, belief in the inevitability of SIFs is remains commonplace,” says Krause. ”This does not infer that organization leaders are callous. The problem is this: traditional safety efforts often fail to address SIFs because they’re not designed to. These design lapses are due in part to current measurement systems that create a ‘blind spot’ for SIF prevention.”

The key step is to identify, understand and mitigate SIF precursors, according to Krause. The term “precursors” is a “profound new addition to the language of safety,” he says.

Precursor data are a vitally important tool to assess safety risks, and give signals of impending problems, he explains. Use of precursor information eliminates leadership’s blind spot, gives visibility to previously hidden information. Precursors represent a leading indicator (not an after-the-incident reactionary measure) that reduces the potential to miss unmitigated exposures with high potential for SIFs, according to Krause.

He explains that a SFI precursor is a high-risk situation in which management controls are either absent, ineffective, or not complied with, and which will result in a serious or fatal injury if allowed to continue. Precursor events are unmitigated high-risk situations.

Activities that may have high proportions of precursor events include:

Situations that may have high proportions of precursor events include:

According to Krause, the Mercer ORC/BST study group found when an injury was related to operation of mobile equipment or watercraft, working under suspended loads, or working at elevations, 90 percent were SIFs.

When the injury was related to lock out tag out, machine guarding and barricades, confined space entry, use of hot work permits, equipment and pipe opening of hazardous chemicals, 100 percent were SIFs.

“Precursors precede the incidents they are related to,” states Krause. “During an emergency shutdown, workers are unable to follow the procedure because it is not understood and appears impractical. This is a precursor situation. Two workers must stand beneath a six-ton doctor roll in order to change it on a paper re-roller. This is a precursor activity.”

Identifying SIF precursors calls for flawless execution of pre-job planning and risk assessment, job safety analysis, behavior observations, assessments and audits, and risk tolerance, says Krause. “New approaches are needed for incident investigation and root cause analysis. Remember, what categorizes a precursor is not its immediate outcome, but its potential to produce a serious outcome,” he says.

Krause offers this example: “Two employees each suffer a minor cut. The outcomes seem identical. But one cut occurred as a worker hustled across a busy office and sideswiped a sharp-edged desk. The other cut occurred when the worker slipped and nearly fell from the top of a rail car. To identify which of these two events is a precursor, ask yourself what would happen if the situations were repeated. The office worker would likely see a similar or better outcome. But the potential exists for the rail worker to suffer a fall from a height resulting in a fatality or serious injury.”

Safety systems should be examined to determine their effectiveness at mitigating precursors, states Krause. “A pipe leaks, it contains flammable material, no one reports the leak, no inspection identifies it, the leaking material finds an ignition source, and there is a fire.

“The chance that is the first an only time any of these events has occurred is low. It is much more likely that leaks have occurred previously, the reporting of leaks is sporadic, and inspections are not comprehensive. Both the design of the safety systems targeting SIFs (their integrity) and the quality of how they are implemented (conformance) need to be assessed,” Krause explains.