How to deal with devilish attitudes

Safety pros deal with human weaknesses probably more than anyone in the organization, save for perhaps HR. So it might benefit you to pick up Dan Ariely’s book “The (Honest) Truth About Dishonesty.” The more I thought about his research findings on human weaknesses, I realized parallels can be drawn between his empirical research and the challenges safety pros face. 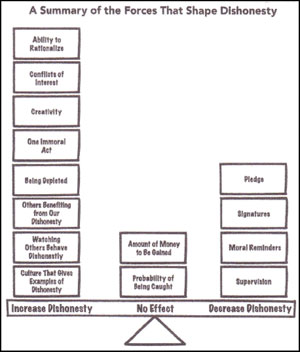 Take the case of the what-the-hell effect. Ariely found that once an individual gives in to temptation (what the hell), it is much easier to cave in the next time temptation surfaces. Consider this from a safety perspective. List all the individuals who have been involved in a safety incident at your facility in the past year. Did these individuals commit the same or similar safety infraction(s) in these incidents? What, if any, disciplinary action was taken with these individuals?

If you find an individual(s) who appears in multiple incidents, committing similar safety infractions, followed by inconsequential actions, you might be dealing with someone who has embraced the what-the-hell effect. As Ariely suggests, intervene early and often before this individual causes a serious incident.

Ariely and his fellow researchers explore numerous variations of dishonesty, in particular as it relates to the topic of “cheating.” Interestingly, Ariely points out all of us cheat; the issue centers on the degree.

Ariely offers his “Fudge Factor Theory.” It’s based on the thesis that our behavior is driven by two opposing motivations: 1) we want to view ourselves as honest, honorable people, and 2) we want to benefit from cheating and get as much money as possible (the financial motivation).2

Some of you might be saying, “I don’t cheat.” Of course you don’t, you just rationalize your behavior so you believe you are not cheating, say when you are shaving or applying makeup in the morning. Understanding the mechanisms of dishonesty is complex, and deterring dishonesty is not an easy task, says Ariely.3

Based on his empirical research, Ariely provides the illustration below summarizing the various forces that shape dishonesty.4

Drawing upon Ariely’s model, here are examples of how safety behaviors can lead to dishonesty and what safety pros can do to alleviate or at least reduce the “fudge factor.”

Ability to Rationalize – Whenever an employee decides to ignore a safety requirement, more often than not he or she has used rationalization to justify his or her action.

Conflicts of Interest – The corporate safety VP insists on each plant site purchasing safety equipment from a specific vendor. Site safety professionals complain that the equipment is inferior; however, they are overruled. After a serious injury caused by the faulty equipment, it is discovered that the specific vendor was the VP’s son-in-law representing a third-world manufacturer of substandard safety equipment. The spouse of the injured employee files a $10,000,000 lawsuit against the company and the VP.

Creativity – Jack decided he had to devise some creative short-cuts to meet the new production numbers to keep his job. One short-cut: ditch a safety checklist for a complex job task. Jack knows what to do. But a piece of equipment had been replaced and upgraded. Jack assumed it was the same as the old equipment; however, he failed to notice the control dial had been changed. When he turned the dial, the equipment shut down causing a one-day delay in production.

One Immoral Act – It all started with taking home office supplies — a pen here and tablet there. Then Lynn was asked about a safety project. She told her supervisor progress was being made when actually none had been made. Her supervisor reported the same to his boss and so on. When the VP asked for a five-slide summary on the progress for the CEO, all were embarrassed.

Being Depleted – Exhausted from losing sleep overseeing five internal safety audits at separate plant sites, Bill became overwhelmed when OSHA appeared at his plant’s front gate. During the visit, Bill was evasive with the inspector when questioned about a series of recent injuries. The inspector sensed Bill’s deception, prompting him to dig deeper into Bill’s OSHA files and finding numerous errors in reporting leading to a $7,500 fine.

Others Benefiting from Our Dishonesty – Frank smashed his finger and decided to not report it because the plant was one month away from setting a new Safe Days record. He did not want his fellow workers to lose their promised bonus.

Watching Others Behave Dishonestly – Cory was assigned to show Bob the ropes. Bob had recently relocated from a VPP site. He was surprised to watch Cory violate so many safety rules. Even though Bob was tempted to fall in line with the social norms of his new supervisor, he inquired about the plant’s attitude about safety while in an orientation meeting. Bob could readily see that Cory had indoctrinated his crew to behave dishonestly when it came to obeying the safety rules.

Culture that Gives Examples of Dishonesty – Ashley, an American, was transferred to the company’s plant in a foreign country. Wondering if employees were inclined to violate safety rules or not, Ashley observed various employees working. As it turned out, the employees in her new home country were no more inclined to violate safety rules than in the United States. With this information in hand, Ashley set out designing safety programs similar to the ones she had succeeded with in the United States.

Ariely presents four specific forces that can lead to reducing the temptation of being dishonest:

Pledge – Ariely discovered having individuals pledge to a code (e.g., an honor code) and sign the pledge before undertaking work resulted in less cheating.

Signatures – Forms with a signature requirement at the bottom or end of the form result in a higher degree of dishonesty. Place the signature block at the beginning of the form.

Moral Reminders – Interestingly, our memory and awareness of moral codes (e.g., the Ten Commandments) may affect how we view our own behavior.5 Recognize individuals who have shown moral courage for something they have done.

Supervision –When co-workers monitor each other’s work, the tendency to be dishonest diminishes considerably, even to the point of being eliminated. Establishing an anonymous monitoring element (e.g., a third-party auditing/review group) likely will have a positive effect on ethics, morals and the bottom line.6

Once you appreciate why people behave dishonestly, the next step is to employ interventions.  As a summary Ariely suggests:

• Recommend moral reminders at the moment of temptation.

• Understand how conflicts of interest work and how deeply they influence us. Devise means to eliminate the conflicts.

• Understand the social infectiousness of dishonesty and employ measures to circumvent the social contagion of cheating.

1 Ariely, D. 2012. The (Honest) Truth About Dishonesty – How We Lie to Everyone – Especially Ourselves. HarperCollins. New York, NY.

There is root blame analysis

Four trends that the EHS field must address

You’ve been promoted to manage, now what?

What “One Word” captures your safety needs?

What kind of audit are you after?

Watch what leaders do, not what they say

What makes a great safety leader?