This website stores data such as cookies to enable important site functionality including analytics, targeting, and personalization. View our privacy policy.
Home » Too many kids in cars still not in safety restraints
Today's NewsTransportation Safety 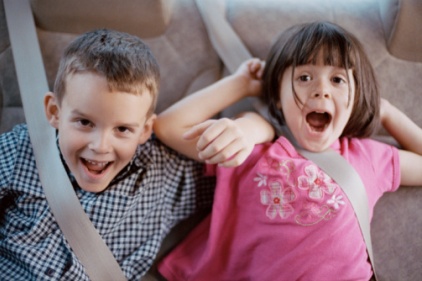 Despite the fact that car crashes are the leading cause of death for children older than three years in the U.S. and send more than 140,000 children to the emergency room each year, new research has found that low proportions of U.S. children are using age-appropriate safety restraints and many are placed at risk by riding in the front seat. The research is published in the September issue of the American Journal of Preventive Medicine.

The American Academy of Pediatrics issued new Guidelines for Child Passenger Safety in 2011 that called for rear-facing car seats at least until the age of two; forward-facing car seats with a five-point harness for as long as possible until the child is the maximum weight and height suggested by the manufacturer; booster seats until an adult seat belt fits properly, when a child reaches around 57” in height, the average height of an 11 year old; and riding in the back seat until the age of 13. “We found that few children remain rear-facing after age 1, fewer than 2% use a booster seat after age 7, many over age six sit in the front seat,” says Michelle L. Macy, M.D., M.S., co-author of the study along with Gary L. Freed, M.D., M.P.H., both of the Child Health Evaluation and Research Unit, Division of General Pediatrics, C.S. Mott Children’s Hospital at the University of Michigan.

The investigators evaluated three years of data from the National Highway Traffic Safety Administration (NHTSA) National Survey on the Use of Booster Seats (NSUBS) collected prior to the release of the new guidelines.

As children aged, a decline in child safety seat use and an increase in being unrestrained were observed. Within each age group, minority children demonstrated lower proportions of age-appropriate restraint use compared with white children. There were persistent differences in the proportions of black and Hispanic children who were unrestrained compared with whites, ranging from a ten-fold difference among infants and toddlers to a twofold difference for older age groups. Among children aged 0-3, the proportions of rear-facing car seat use were lowest among minority groups, but even among whites just 17% were rear-facing. Higher proportions of minority children were prematurely transitioned to seat belts.

“The most important finding from this study is that, while age and racial disparities exist, overall few children are using the restraints recommended for their age group, and many children over five are sitting in the front seat,” says Dr. Macy. “Our findings demonstrate that not all children have been reached equally by community-based public education campaigns and the passage of child safety seat laws in 48 states. Further development and dissemination of culturally specific programs that have demonstrated success in promoting restraint use among minority children are necessary. Further, the findings may also help in developing strategies to lower the racial and ethnic disparities seen in children experiencing crash-related injuries.”

OSHA chief: Too many workers still being injured