Jackson to leave EPA; who’s next? 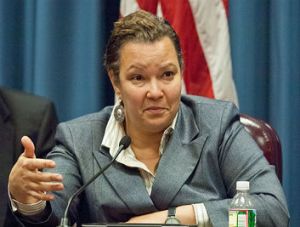 During the holiday break, on December 27, EPA administrator Lisa P. Jackson announced her departure from the Obama administration cabinet after the President’s State of the Union address in late January. Jackson issued this statement:

“I want to thank President Obama for the honor he bestowed on me and the confidence he placed in me four years ago this month when he announced my nomination as Administrator of the Environmental Protection Agency. At the time I spoke about the need to address climate change, but also said: “There is much more on the agenda: air pollution, toxic chemicals and children’s health issues, redevelopment and waste-site cleanup issues, and justice for the communities who bear disproportionate risk.” As the President said earlier this year when he addressed EPA’s employees, “You help make sure the air we breathe, the water we drink, the food we eat are safe. You help protect the environment not just for our children but their children. And you keep us moving toward energy independence…We have made historic progress on all these fronts.” So, I will leave the EPA confident the ship is sailing in the right direction, and ready in my own life for new challenges, time with my family and new opportunities to make a difference.”

Jackson, the nation’s first black EPA chief, grew up as the child of a postal worker in New Orleans. As a Louisiana native, she was the public face of the administration’s responses to the massive Deepwater Horizon oil spill in the Gulf in 2010, hosting town meetings throughout the region to reassure residents of the government’s support.

According to the blog, Care 2 Make A Difference, Jackson often spoke about the fact that the nation’s poor frequently live in industrial zones where they suffer disproportionally from pollution of the air and water. The health impacts of pollution hit close to home for Jackson. She spoke publicly of the anguish she felt watching her infant son suffer from asthma, an illness associated with high levels of particulates in the air.

As befits the head of a hugely controversial regulatory behemoth, Jackson’s departure was hailed by some, greeted with relief by others. Environmentalists gave her points for speaking out on climate change while the Obama administration remained mum on the subject.

Jackson’s reviews in the press were decidedly mixed:

“Lisa Jackson has been a courageous EPA administrator” (The Baltimore Sun)

“Lisa Jackson and the limits of executive power” (The Daily Caller)

Jackson’s EPA drafted regulations that limit mercury emissions from coal-fired power plants. She also initiated a sweeping agency reviewof the impact of mountaintop removal in states like West Virginia and Kentucky, a practice that dumps raw mining waste into wetlands and streams.

Republican Presidential candidate Mitt Romney called for her resignation, and some Republicans accused her of waging a war on coal.

Jackson is credited with restoring the EPA’s regulatory muscle and standing up to the fossil fuel industry, most notably by crafting new emission levels for cars, and doubling fuel efficiency standards over the next decade and a half.

The president has not yet chosen a successor at the EPA, according to numerous news sources. Speculation has focused on two of Jackson’s subordinates, Bob Perciasepe, the agency’s deputy administrator, who was formerly the chief operating officer at the National Audubon Society, and Gina McCarthy, an assistant administrator for the Office of Air and Radiation, who often filled in for Jackson at congressional committee hearings.

Jackson’s replacement will face stiff resistance from the Republican-controlled House, according to the blog Care 2 Makes A Difference. A spokesman at the Natural Resources Defense Council, said the biggest challenge for the next EPA chief will come from mostly Republican legislators who hold “entrenched anti-environment position on ideological grounds”. Recent years have seen “one vote after another to undermine and delay needed regulations,” he said.

Another worry of pro-environmentalists is the House Appropriations Committee, which currently has a 21-to-14 Republican majority. Republicans, using the fiscal cliff and the need for a balanced budget as a pretext, might try to block critical funds required by the EPA to enforce its own regulations, according to Care 2 Make a Difference.

Green groups hope Jackson’s successor will push for cutting CO2 emissions (greenhouse gases) at existing power plants in addition to cuts that apply to newly built plants, and will work to block the Keystone XL Pipeline, which would transport oil from Canada to the U.S. Gulf Coast.

The president has said that he will make a final decision on Keystone during the current year.

There is speculation that Jackson is resigningbecause the president has already decided to approve the controversial pipeline, according to Care 2 make A Difference. Jackson “left as a matter of conscience,” according to a longtime friend of the EPA administrator. This source told Care 2 Make A Difference that Jackson “has too much principle to support [the pipeline], between the climate impacts of it and the water quality impacts of it … She was the person who pushed the hardest for the moratorium on the pipeline and now she’s leaving.”

There is also ongoing investigations into Jackson’s inappropriate use of a pseudonym in email communications.