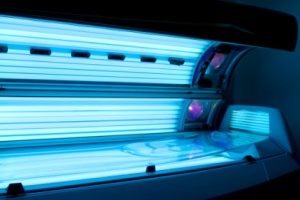 Posted with permission from Fairwarning.org (scroll down to read about FairWarning staff writer Bridget Huber):

A new campaign by the tanning industry to promote the safety of sunbed use has come under fierce attack from the American Academy of Dermatology, which is accusing the industry of making claims that are “ridiculous” and unsupported by scientific evidence.

In the latest exchange between the two sides, the dermatologists blasted the newly formed American Suntanning Association for disputing the medical consensus that tanning indoors increases the risk of skin cancers, including melanoma, the deadliest kind.

The launch last month of the tanning association, made up of 1,400 salon owners, steps up the $5 billion industry’s campaign to defend itself against mounting evidence of the harms caused by tanning indoors. It builds on what has been  an extraordinary effort to portray doctors and other health authorities as conspiring to unnecessarily scare the public about tanning, as FairWarning reported in August.

The tanning association bluntly describes its strategy in a document on its letterhead that was posted last month on TanToday, an online industry forum: “Promoting the indoor tanning industry will require retention of scientists throughout the world to help us debunk the scientific reports being used against us, and a major PR and lobbying campaign to bring the truth about indoor tanning to the government and to the public at large.”

The academy of dermatology said the tanning association’s recent statements about the risks and benefits of tanning “are ridiculous and there is no data to support them. Indoor tanning is dangerous.”

In response, the tanning association said: “The public does not benefit from the continuation of a protracted, sound-bite oriented fight between professional sunbed salons and anti-UV [ultraviolet light] lobbying groups…We promote a fair and balanced message about UV exposure.’’

Alex Howe, a spokesman for the tanning association also attempted to distance the organization from the document posted on TanToday, saying it is not the group’s official position. He did not respond to follow-up questions about why the document was prepared.

However, the tanning association has hired a major public relations firm, is planning a lobbying campaign and, Howe said, will work with “the many scientists who already support a balanced message.”

In a podcast last week, Doug McNabb, a board member of the tanning association, described the new group’s goal: “Our main objective has to be to get more people in tanning beds.” The board member, McNabb, added: “The direction we’re going to take is going to be around media relations and regulatory relations that direct people to indoor tanning salons.”

The World Health Organization says ultraviolet light from sunbeds causes cancer. DeAnn Lazovich, a cancer epidemiologist at the University of Minnesota Cancer Center, whose own research has linked sunbed use to melanoma, said the industry’s long-running efforts to cast doubt on the science are just “smoke and mirrors” and an attempt to continue selling a service linked to cancer.

“They say, ‘Tan responsibly,’ but I think it is irresponsible for them to promote their product when we know it is a cause of skin cancer,” said Lazovich, whose work previously has been attacked by the tanning industry.

Jerod Stapleton, an assistant professor of medicine at the Cancer Institute of New Jersey who has studied the tanning industry, said many of the contrary studies cited by indoor tanning proponents are not peer reviewed and appear to rely on cherry-picked data, have methodological flaws or have been funded by industry. “It’s an interesting way of going about it,” he said. “If you don’t like what the science says, just go do your own.”

Jan Meshon, a member of the tanning association, sees it differently. In a  press release, Meshon said: “Consumers who choose to tan – and it should be their choice – need to be able to do so based on correct information about the potential benefits and risks of UV exposure. When organizations who benefit by improperly vilifying all UV exposure compare the manageable risks of sunlight to arsenic and plutonium in public statements, something’s seriously wrong.”

Howe, the tanning association’s spokesperson, would not respond to questions about the group’s legislative strategy. But the industry wants to convince the Food and Drug Administration to refrain from tightening restrictions on sunbeds, which the American Cancer Society and other groups are advocating.

Even before the new group formed, the industry was trying to prevent states and local governments from passing laws making it illegal for teens to tan indoors. At least 30 states already have imposed some limits on teen tanning, and Vermont and California ban anyone under age 18 from using a sunbed.

The industry has argued that sunbeds are a good source of Vitamin D, which is created by the body in response to UV light. It blames dermatologists for scaring people from the sun and inducing an epidemic of vitamin D deficiency in the process.

As FairWarning has reported, indoor tanning’s proponents – including a network of non-profit organizations with ties to tanning salons – tout the vitamin as a panacea for ills ranging from autism to breast cancer. However, the Institute of Medicine, part of the National Academy of Sciences, says there isn’t enough evidence to say the vitamin provides any benefits other than improving bone health and disputes the notion that there is an epidemic of vitamin D deficiency.

As noted last week by the academy of dermatology, in 2010 the Federal Trade Commission reached a settlement with another industry group, the Indoor Tanning Association, for making misleading statements about the health benefits of sunbeds. Separately, the Texas Attorney General has sued a salon chain for claiming sunbeds reduce the risk of cancer and provide other health benefits. That case is set to go to trial in September.

The dermatology group, in its recent statement, specifically criticized the new industry group for claiming that research pointing to indoor tanning’s ill effects is misleading. The new industry group maintains that much of this research wrongly lumps in sunbed use at professional salons – which it contends is less risky – with sunbed use at doctor’s offices and home, which it claims is more dangerous. When sunbed use in salons is considered on its own, “the risk virtually disappears,” the tanning group said.

The dermatologists dismissed that claim, saying ultraviolet light is used in treatments for some skin conditions, including psoriasis and atopic dermatitis. The “crucial disparity,” said the dermatologists’ group, is that the procedure is done by a medical doctor with appropriate training and expertise. “This type of medical care is not provided at an indoor tanning salon, where operators have minimal knowledge about the potential side effects of UV light,” the statement said.

Bridget Huber is a FairWarning contributor.