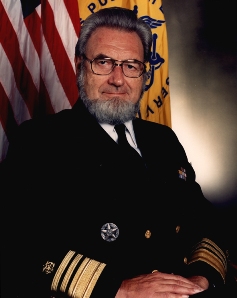 Dr. C. Everett Koop, the medical professional given credit for playing a major role in changing public attitudes about smoking, died yesterday at his home in Hanover, N.H. at the age of 96.

Koop, a pediatric surgeon, was appointed to the post by President Ronald Reagan in 1981 and served until 1989. A descendant of 17th century Dutch settlers, Koop grew up in Brooklyn, NY.

Koop is credited for helping to inform the public about the dangers of smoking and for urging the federal government to take strong measures to address the AIDS crisis. During Koop’s public service, the percentage of Americans who smoked dropped from 33 to 26. Restrictions on smoking in public places, offices and other work sites became widespread during his tenure.

Many Americans can still recall Koop’s TV public service announcements, in which he would wear the gold-braided dark-blue uniform of a vice admiral – the surgeon general’s official uniform.

Politicians representing tobacco-growing states frequently criticized Koop, as did conservatives upset by Koop’s decision to not use his office to promote his anti-abortion views and by his emphasis on AIDS prevention and treatment. Liberals who’d opposed his appointment became supporters. Conservatives who’d voted for him became detractors.

Koop was disappointed that he’d been unable to convince Reagan or his successor as president, George Bush, that making health care available to more Americans should be a priority.