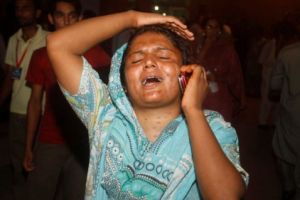 Two clothing factories in Bangladesh and Pakistan were inspected for safety conditions by independent auditing firms prior to 2012 fires that killed hundreds of employees, according to a new report by the Clean Clothes Campaign (CCC) and the Centre for Research on Multinational Corporations (SOMO).

Entitled ‘Fatal Fashion,’ the report describes a fatal September 2012 blaze at Ali Enterprises in Karachi, in a November 2012 factory fire at Tazreen Fashions Limited in Dhaka. Both companies produce apparel for European and American clothing brands and retailers, including Walmart. More than 400 workers were killed in the incidents and many others were severely injured. Sub-standard buildings, poor emergency procedures, blocked fire exits, and overcrowded workplaces have been blamed for the high death toll. To date, the lion share of workers and families affected by the fires in Karachi and Dhaka have not yet received any compensation.

Both factories had been subjected to numerous audits by independent firms prior to the tragedies. Ali Enterprises received the SA8000 certificate just three weeks before its fire. Structural and highly visible safety deficits and falsified documentation of fire drills went unnoticed by auditors.

When safety hazards were pointed out, companies failed to take adequate action. A Business Social Compliance Initiative (BSCI) audit found evidence of safety violations at Tazreen Fashions, however, the report was put in confidential database, and no follow-up was given.

CCC and SOMO say the factory fires detailed in the report are symptomatic of an ailing system.

“They reflect systemic flaws on the level of government protection of human rights, a deathly reliance of international brands on a failed auditing model where even the absence of a fire exit remains unaddressed, and a gross disrespect shown by the garment industry for workers’ rights,” say the two organizations, in a joint statement.

Since the Tazreen fire another 28 factory fires have been reported in Bangladesh alone, injuring at least 591 more workers and killing another eight.

SOMO and CCC are calling upon companies to stop relying on audit firms and certification organizations when it comes to safety.

“These firms lack safety expertise, are not trusted by workers and trade unions rendering their worker interviews implausible, and are commonly paid by the factory owner. Even when they detect violations, they fail to resolve them,” says Tessel Pauli of CCC. “Instead, buyers should implement a safety programme that includes independent inspections with mandatory reparations, public disclosure of workplace locations and inspection reports, and a central role for workers and unions. In addition companies should ensure pricing covers the costs of eliminating deathly hazards and operating safely.”