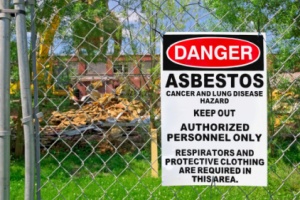 Maryland’s Court of Appeals has ruled that asbestos companies are not responsible for illnesses suffered by family members of asbestos workers who brought the substance home with them in their clothing prior to 1972.

The ruling overturned a $5 million verdict to a woman who was diagnosed with malignant mesothelioma in 2006.

Asbestos is a group of naturally occurring minerals widely used in insulation, floor tiles building materials and some automotive parts. Heavy occupational exposures to asbestos tend to occur in the construction industry and in ship repair, particularly during the removal of asbestos materials due to renovation, repairs, or demolition. Workers are also likely to be exposed during the manufacture of asbestos products (such as textiles, friction products, insulation, and other building materials) and during automotive brake and clutch repair work.

Breathing asbestos fibers can cause a buildup of scar-like tissue in the lungs called asbestosis and result in loss of lung function that often progresses to disability and death. Asbestos also causes lung cancer and mesothelioma.

Asbestos has been recognized as a workplace hazard since the 1930s and is highly regulated by OSHA and the EPA. At issue was whether or not an employer could be held responsible for its effects on the household members of employees.

The court ruled that that the take home exposure dangers were not known in the 1960s, so Georgia-Pacific Corp. was not obligated at that time to warn relatives about its dangers. OSHA issued regulations covering asbestos in 1972.

According to trial testimony, Jocelyn Farrar was exposed to asbestos while doing her grandfather’s laundry in the late 1960s. Her grandfather, John Hentgen, worked at the Forrestal Building in Washington while construction workers applied Georgia-Pacific drywall cement in 1968 and 1969. Hentgen's work clothes were so reportedly so caked with asbestos that Farrar had to shake them out before washing them.

Decades later, Farrar developed lung disease. In 2009, a Baltimore jury awarded $5 million in damages to Farrar. That ruling was upheld by the Court of Special Appeals. Georgia-Pacific subsequently appealed to the state’s highest court, whose seven members ruled unanimously for Georgia-Pacific.