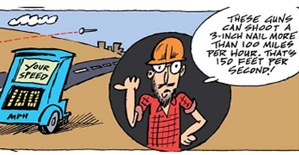 In its efforts to communicate nail gun safety guidance to the construction industry, the National Institute for Occupational Safety and Health (NIOSH) has released its first-ever comic book: Straight Talk About Nail Gun Safety.

“The comic has been well received by organizations and stakeholders  interested in increasing awareness and prevention of injuries resulting from nail gun use,” according to Jim Albers, MPH, CIH; Brian Lowe, PhD, CPE and  Stephen Hudock, PhD, CSP, writing on the NIOSH Science blog.

The publication uses comic-book-style illustrations to convey some serious information about the injuries pneumatic nail guns can cause and the velocities they can produce (which required considerable research on the part of the authors, who had to sift through a mass of information on the subject).

The authors attribute the differing nail gun velocities reported over the years to the fact that two different types of fastening tools used in the construction industry to shoot fasteners into building materials have been called “nail guns.”

One tool uses an explosive charge and the other uses compressed air as energy sources to propel the fastener. The higher velocity tool -- called a “powder actuated tool” (PAT) -- is used to drive fasteners into concrete or metal.

The far more common pneumatic nail gun (or nailer) used to fasten lumber together uses compressed air to propel a piston to drive the nail into lumber.

“Regardless of the lower velocity, pneumatic nail guns are dangerous tools,” according to the post. “Deaths and seriously disabling injuries have occurred when fasteners were shot from a pneumatic nail gun with immediate contact to the head, chest, or torso.

“It is in the pneumatic nail gun user’s best interest to handle these tools as if they were a firearm despite having a lower velocity.”