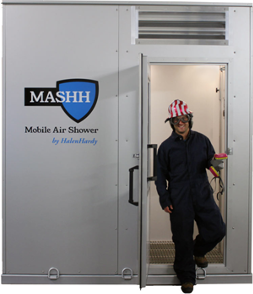 The Mobile Air Shower by HalenHardy (MASHH), which removes hazardous silica dust from workers' clothing during oil and natural gas completions operations, will be introduced at the Shale Insight Conference in Philadelphia on Sept. 24-26.

The launch of the MASHH unit will occur at the industry-wide convention as well as a presentation at the Technology Showcase sponsored by the Marcellus Shale Coalition and Shale Gas Innovation & Commercialization Center, for which the MASHH unit was selected as one of 12 finalists.

The MASHH air shower is a health and safety system that will prove valuable during hydraulic fracturing operations that produce respirable crystalline silica (since completions contractors utilize thousands of tons of silica sand at each frac site). When respirable crystalline silica, which is invisible to the naked eye, is inhaled, serious — sometimes fatal — illnesses such as silicosis, tuberculosis and congestive heart failure may result.

"If you've ever worked for more than an hour in a dusty environment, you know that you can't avoid getting dust on your clothes,” said Donny Beaver, HalenHardy’s co-founder and CEO. “It settles on your shoulders & arms and attaches to all parts of your clothes when you bump up against dusty equipment.”

When workers wear contaminated clothing, respirable crystalline silica is constantly being emitted as they move about, and stays in their breathing zone until uniforms are cleaned. Ignoring contaminated clothing or using ineffective clothes cleaning methods will significantly increase the workers’ risk of contracting silicosis.

HalenHardy Chief Scientist, Bob Glenn notes, “When dust-covered workers go on break, we’ve observed that they almost always do two things. First, they remove their respirator. Next, they slap the dust from their shoulders, chests and arms. This is a very dangerous practice.”

When working around silica sand, this slapping action can liberate millions of microscopic crystalline silica particles directly into a worker’s breathing zone. Studies performed by The National Institute for Occupational Safety and Health (NIOSH) reveal that worker exposures can go through the roof through this seemingly-innocent "hygiene" practice, creating exposure levels by 1,000% to 1,600%*. To avoid these over-exposures, workers should clean their clothing at each break period before they remove their respirators.

“If you could see the particles, industrial workers might look like Pig Pen, the lovable Peanuts© character who’s always surrounded by a cloud of dust,” Glenn added. “But there’s nothing lovable about silicosis, which is irreversible and incurable.”

In addition, NIOSH research indicates the vast majority of companies engaged in industries using ctalline silica were not utilizing "best practices" for their employees' clothes cleaning. The observed and documents practices included:

“While the industry is taking steps to address worker exposure, employers and workers need to remember that respirable crystalline silica particles are almost as light as air and will always find the holes in engineering controls,” Beaver added. “In fact, silica sand abrades and wears out engineering controls, creating holes and leaks. The silica sand mining industry has found that respirable silica dust has a way of cropping up where you least expect it, exposing workers in the process. It’s just the nature of the beast. The MASHH unit is essential to address worker hygiene and health practices, which will always be a necessary component to a comprehensive Silicosis Prevention Program.”

Because a MASHH cycle takes less than 30 seconds, a single unit can process an entire workforce expeditiously. Because the MASHH unit is mobile, units can be installed quickly and economically.

Alex Moore, HalenHardy VP of Sales notes, “Our program can be custom tailored to each client. We offer short-term rental, long-term leases and purchase options for MASHH units.”

“Industry will be seeking solutions that are effective, practical and affordable,” Beaver concluded. “We believe the MASHH Mobile Air Shower is exactly that.”

At the Shale Insight conference, attendees can visit the HalenHardy display, (Booth #706), to get “hands on” with a MASHH unit demonstrations of the system’s capabilities.

HalenHardy was co-founded by Donny Beaver and Carl Cohen in January 2013 to focus on health and hygiene products and services relating to worker exposure to respirable crystalline silica in the oil and natural gas industry and its supply chains. HalenHardy has two main divisions. The Products Division launched MASHH (the Mobile Air Shower by HalenHardy) in late August 2013 to reduce worker exposure to respirable silica by removing dust from worker clothing in less than 30 seconds per employee.

The HalenHardy corporate office and manufacturing facility is proudly based on Main Street in Bellwood, PA, equidistant from the Marcellus Shale’s two most active areas, Canonsburg and Towanda.