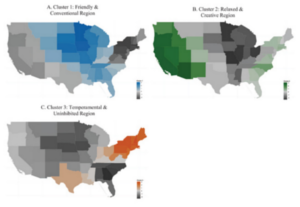 Americans with similar temperaments are so likely to live in the same areas that a map of the country can be divided into regions with distinct personalities, according to new research published by the American Psychological Association (APA).

What are the characteristics of your region?

People in the north-central Great Plains and the South tend to be conventional and friendly, those in the Western and Eastern seaboards lean toward being mostly relaxed and creative, while New Englanders and Mid-Atlantic residents are prone to being more temperamental and uninhibited, according to a study published online by APA’s Journal of Personality and Social Psychology®.

In infographic at right, the states and blue are "friendly and conventional," the ones in green are "relaxed and creative" and the ones in orange are "tempermental and uninhibited."

Some areas of U.S. friendlier than others

“This analysis challenges the standard methods of dividing up the country on the basis of economic factors, voting patterns, cultural stereotypes or geography that appear to have become ingrained in the way people think about the United States,” said lead author Peter J. Rentfrow, PhD, of the University of Cambridge. “At the same time, it reinforces some of the traditional beliefs that some areas of the country are friendlier than others, while some are more creative.”

The researchers analyzed the personality traits of more than 1.5 million people. Through various online forums/media (e.g., Facebook and survey panels), participants answered questions about their psychological traits and demographics, including their state of residence. The researchers identified three psychological profiles based on five broad dimensions of personality — openness, conscientiousness, extraversion, agreeableness and neuroticism — also known as the “Big Five” personality traits. When the researchers overlaid the findings on a national map, they found certain psychological profiles were predominant in three distinct geographic areas. The data were collected over 12 years in five samples with participants from the 48 contiguous states and the District of Columbia. Overall, the samples were nationally representative in terms of gender and ethnicity, with the exception of a larger proportion of young people.

“These national clusters of personalities also relate to a region’s politics, economy, social attitudes and health,” Rentfrow said. The study found that people in the friendly and conventional regions are typically less affluent, less educated, more politically conservative, more likely to be Protestant and less healthy compared to people in the other regions. The relaxed and creative states’ residents are more culturally and ethnically diverse, more liberal, wealthier, more educated, comparatively healthy and less likely to be Protestant than those living in other regions. The temperamental and uninhibited region has a larger proportion of women and older adults who are more affluent, politically liberal and unlikely to be Protestant.

As for what might have shaped the regional personalities, theories plus research on migration and social influence offer clues, the authors said. For instance, research has shown agreeableness is a trait often found in people who stay in their hometowns, and the analysis indicated that a large proportion of residents in the friendly and conventional region lived in the same state the year before. The relaxed and creative region may have been influenced by a frontier mentality that endures with lots of young people, professionals and immigrants moving to the region for educational and employment opportunities. In the temperamental and uninhibited region, significant numbers of people have moved away, and research has shown that people who move to another part of the country are typically high in openness and conscientiousness and low in neuroticism — almost entirely the opposite of the temperamental and uninhibited profile. “Considering that the temperamental and uninhibited profile is marked by high neuroticism, it’s reasonable to speculate that social influence might facilitate the spread of anxiety and irritability across the region,” the study said.