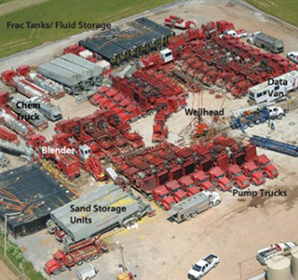 Oil and gas exploration often involves the controlled use of explosives to facilitate extraction.  Traditionally, wireless devices have been shut off to ensure detonators are not inadvertently triggered by a radio-frequency (RF) signal. Turning off wireless gas-detection equipment, however, leaves workers exposed if the atmosphere becomes bad – that is, until now.

For decades, blast-area security prohibited the use of wireless devices at any location where blasting caps or other explosives are present to prevent a wireless signal from inadvertently detonating explosives. If a radio-frequency signal is powerful enough, the wires of a commercial electric detonator can serve as an antenna and pick up the electromagnetic signal, potentially firing the detonator and prematurely setting off explosives. To eliminate such a risk, wireless devices such as cell phones and two-way radios – as well as radio-based gas-detection systems – need to be shut off in and around active blast-zone areas.

Shutting off wireless gas detectors – which can be placed near potentially hazardous areas such as drill wellheads – leaves workers at the job site potentially exposed to unseen toxic gases and vapors without an early warning system to alert them to contaminated air. Non-wireless portable or personal monitors that cover a worker’s breathing zone are recommended at blast sites, but they only alarm at the time of exposure and do not provide early detection to dangerous or potentially explosive gas. Wireless systems with remote gas detectors can be quickly deployed around a perimeter of a project or in other fixed areas to enhance personal and handheld monitoring by providing continuous, real-time monitoring to detect toxic gases, such as hydrogen sulfide (H2S) and flammable vapors, such as methane (CH4), before they pose a danger to workers or others in the area.

Key applications in oil and gas

In the upstream oil and gas industry, one of the requirements for maximizing production of new or existing wells relies on a process known as “perforation.” It involves generating holes in the production casing to get access to a formation or reservoir. One typical method requires using a perforating gun that electrically fires charges that put holes into the wellbore casing, or liner. Its key advantage includes improved control of the well by providing precision in connecting to formations and the ability to seal perforations that are no longer productive.

While blasting is a key part of the process, it can lead to dangerous emissions of deadly or combustible gases and vapors, including leaks from the wellbore. Wireless detectors can be deployed in and around the wellbore for early detection of any gas or vapor leaks. Data trailer personnel can monitor the readings in real time and the data gets logged for later retrieval. Area-wide alarms can be sounded if leaks threaten personnel, allowing teams to avoid direct contact with dangerous gases that can have both short-term and long-term health consequences. Workers are often also equipped with non-wireless personal gas detection monitors.

Fracking begins with traditional vertical drilling to reach deep underground shale formations and then turns horizontal as the drill moves through the shale thousands of feet below the surface. Perforation blasts are then used to punch holes in the casing and shale to create small fissures through which hydrocarbons flow into the well stream. Fracturing fluid, consisting primarily of water and sand, along with chemicals to improve flow, is then pumped into the well to fracture the underground fissures. The water is removed, but the sand remains to hold the fractures open, which permits gas to flow to the surface. While the drilling process can take about 2 to 3 months to complete, fracking can be completed in days and can provide up to 20 to 40 years of well production.[ii]

Fracking sites are typically large areas where trucks bring in source materials and remove spent materials. This makes perimeter monitoring one of the key applications in fracking, which provides safety for workers and any communities or other work sites that may be nearby. At the same time, separate monitors can be deployed near the wellbore and other process equipment to ensure any unrecovered gases can be identified and appropriate safety actions can be taken.

Coalbed methane is a form of natural gas extracted from coal beds. The methane is stored inside the coal, but open fractures, or cleats, allow the gas to escape. Because of the methane content, gas-detection monitoring is critical. While methane is non-toxic, it is extremely flammable and can form explosive mixtures with air. The MeshGuard system monitors LEL and is rugged enough to operate dependably in these harsh monitoring environments.

of Oaks, Pennsylvania, verify the wireless MeshGuard Gas-Detection System is safe to use in blast-zone areas without posing a risk of premature or unexpected detonation of explosives. According to the report, the MeshGuard sends a low-voltage signal in a small fraction of a second, equivalent to about 0.07 milliwatts, which is “imperceptible” by even the most sensitive commercial electric detonators.[iii]

The wireless MeshGuard Gas-Detection System provides simple and rapid deployments in a wide range of industrial-safety and remote-monitoring applications. It combines gas-detection and advanced wireless technology to provide real-time control of area-wide gas and vapor threats, while eliminating the need for time-consuming and costly cable-installation projects.

The MeshGuard system, which uses a small radio transmitter to send data wirelessly, is safe for use in close proximity to the lead wires and explosive charges of commercial electric detonation systems.

About one foot (30cm) of wire was connected to the ends of the lead wires of the #2 light bulb to create a dipole antenna. If such an antenna picks up enough RF power to fire an electric detonator, the light bulb glows brightly. When this assembly was placed near the MeshGuard, which was then turned on, the bulb did not glow. Various orientations of the pick-up antenna were attempted, including connecting the wire ends together to form a loop antenna. All of these efforts failed to make the bulb glow, indicating the RF power pick-up was less than the power-level required to fire an electric detonator.

The detector was then tested using the simulated electric detonator. By connecting about two feet (60cm) of the lead wires to the VTC, which is a very sensitive RF detector, a dipole antenna was formed. This assembly is similar to an electric detonator with its lead wires stretched out. It was tested with the MeshGuard many times while re-orienting the antenna in relation to the MeshGuard detector. The vacuum thermocouple registered an output of only 1.50 volts, an indication of negligible RF power pick-up. This corresponds to about 0.07 milliwatts, which is “imperceptible” by even the most sensitive commercial electric detonators.

Yan Banducci is Global Product Manager, Fixed and Mesh Networking Systems for RAE Systems.  He has held several key positions at the company, including Global Product Manager for Wireless Systems and applications engineer.  He holds a degree in mechanical engineering from the University of California at Davis.  Mr. Banducci is the author of numerous application and technical notes with regards to both wireless and traditional gas-detection technologies.