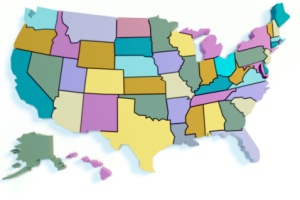 While federal regulatory action get the lion’s share of the attention, EHS professionals should pay even more attention to what happens at the state level, according to American Industrial Hygiene Association® (AIHA) government guru, Aaron K. Trippler, for a variety of reasons.

“With the federal government tied up in other matters – the budget and debt ceiling, for example – and a broken rulemaking process, it takes months, if not years, for legislation and regulations to be enacted at the federal level,” said Trippler, who, as AIHA Government Affairs director is the organization’s chief liaison with Congress and federal agencies. “That’s why it’s important to devote resources to monitor state legislation and engage in rulemaking efforts of interest to the OEHS profession at the state level. And nowadays, it appears that legislation passed at the state level eventually comes up at the federal level.”

Trippler devotes about devotes about 30 percent of his time to state government relations, monitoring legislation and taking action on bills of interest to EHS professionals.

Here are the issues he identifies as being likely to show up on states’ legislative and regulatory agendas in the coming months:

Mold abatement and licensing: The states have continued to examine the issue of mold abatement to determine whether it should be regulated and whether those involved in this work should be licensed. However, as some states are attempting to set exposure limits, others are trying to set standards or legislation to abate and remediate. One of the major problems in enacting this type of legislation is deciding who is qualified for licensing and who is not.

Hazardous substances: More states have begun discussing how to deal with hazardous materials—addressing everything from asbestos to all kinds of chemicals. This may be due in part to the fact that the federal government continues to face the consequences of chemical hazards, such as those that caused the devastating fertilizer plant explosion in West, Texas, in 2013.

Title protection and legal recognition of the profession: AIHA has been successful in enacting this title protection legislation in more than 20 states.  To date, there are more than 350 titles in occupational safety and health, yet fewer than 30 or so are granted by accredited bodies such as the American Board of Industrial Hygiene (ABIH).  Policymakers are at a loss as to which professionals to recognize and how to determine their qualifications.