Patient falls off OR table: System error or human error? 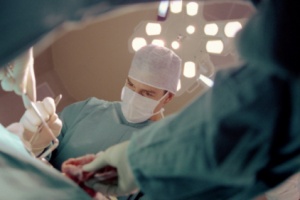 An anesthetized patient fell to the floor headfirst from an operating room table during a laparoscopic appendectomy in Scotland. The table had been tilted into an extreme head down position to facilitate the operation. Fortunately, no injury occurred.

The Edinburgh Evening News accountsays that there were 10 staff members in the room at the time the case started, but no one had placed a safety restraint on the patient.

A follow -up story noted that the hospital has experienced 11 other major surgical errors in the last year including two instances of wrong-site surgery and a case in which five swabs were left inside a single patient.

An investigation by the hospital noted that the level of situational awareness of the operating room staff was inadequate, and teamwork and communication were poor. In addition, the safety culture within the operating room was described as not highly attuned to patient safety.

The staff was also distracted by mobile phone use and idle chatter.

Instead of addressing the obvious human errors such as failure to place the safety strap, which in U.S. hospitals is clearly the duty of the circulating nurse, the hospital's plan of correction focused on the following typical system-type corrections:

• Compulsory training of 1,200 staff. Although there were 10 staff for a laparoscopic appendectomy (in the U.S. there would be 4, nurse, scrub tech, surgeon, anesthesiologist), I doubt that there are 1,200 people working in the operating room of this 570-bed hospital. What will those not working in the OR have to gain from compulsory training? I wonder if anyone considered that 10 staff for an appendectomy is far too many, and that's why there was a lot of idle chatter. Six of the staff had nothing to do until the patient needed to be picked up off the floor.

• A ban on talking at key times during operations. This one will be hard to enforce. Who decides what the key times are? I also don't see what it had to do with the incident since tilting the table would not be considered a key time in the case.

• Sanctions for staff who fail to meet the new standards. Also be hard to enforce. How will this be judged?

I would have talked with the nursing staff and asked them whose job it was to place the safety strap. If you want to make a system change, why not clearly specify which staff member is responsible for that action? And how about using a checklist?

Five years ago, the Scottish Patient Safety Program recommended using pre-surgery meetings and checklists to protect patients. The investigation showed that in this hospital, checklists were completed about 10% of the time and often not properly. The staff claimed that they didn't have time to do the checklists. Ten people in the room for an appendectomy and no one has time to complete a checklist?

Next I would have asked the anesthesiologist where he was. Usually the job of adjusting the table is his, and the controls are at the head of the bed. He should have noticed the patient was beginning to slide off the table and intervened.

Finally I would have asked the surgeon just how much head down tilt he needed. I have never even come close to having a patient more than about 30 degrees of head down during a laparoscopic appendectomy.

This hospital had a number of appropriate systems in place. The staff simply disregarded them. Creating more meetings and rules that are unlikely to be followed or make a difference will not solve the problem of a staff with a "can't do" attitude.