Passengers have to take the wheel 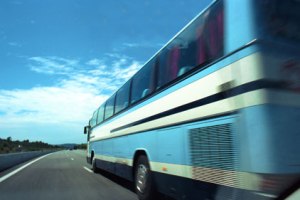 A commercial bus driver who failed to tell his medical examiner about episodes of dizziness and fainting has been ordered out of the driver’s seat after his medical condition nearly caused a bus filled with passengers to crash on an interstate highway.

According to the U.S. Department of Transportation’s Federal Motor Carrier Safety Administration (FMCSA), Terence W. Slowther was driving a bus carrying the U.S. Coast Guard Academy men’s hockey team on Feb. 9, 2014, when he experienced a medical episode on Interstate 95 in Connecticut and the vehicle started swerving erratically at a high rate of speed.

Several of the quick-thinking cadets removed Slowther from the driver’s seat and regained control of the vehicle, bringing it safely to a stop.

A subsequent investigation by FMCSA and Connecticut officials revealed that on less than two months prior to the incident – on December 27, 2013 -- Slowther failed to disclose prior episodes of dizziness and fainting occurring between 2010 and 2012 to his medical examiner as required during his CDL medical qualification examination.

FMCSA declared Slowther to be an imminent hazard to public safety and has ordered him not to operate any commercial motor vehicle in interstate commerce.

“Drivers who hide critical medical information when applying for a license will not be tolerated by this department,” said U.S. Transportation Secretary Anthony Foxx. “Thanks to the quick actions by the Coast Guard Academy cadets on board, tragedy was avoided in this case, but no passenger should have to worry about their driver’s ability to transport them safely to their destination.”

FMCSA’s imminent hazard out-of-service order for Slowther is based upon his disregard of federal safety regulations, the safety of his passengers and of the motoring public.

Commercial drivers must pass a U.S. Department of Transportation medical examination at least every two years in order to obtain a valid medical certificate, maintain their CDL and legally drive a commercial motor vehicle.

Beginning May 21 of this year, interstate CDL drivers will be required to obtain their medical certification from a healthcare professional who is listed on the National Registry of Certified Medical Examiners and has been trained, tested and certified on the specific physical qualifications that affect a driver's ability to safely operate the vehicle.

FMCSA developed the National Registry of Certified Medical Examiners final rule as part of the agency’s commitment to enhancing the medical oversight of interstate drivers, and preventing commercial vehicle-related crashes, injuries and fatalities. Among the new responsibilities of the medical examiner will be to provide identifying information for each driver examined to the National Registry to prevent medically unqualified individuals from obtaining or retaining a CDL.