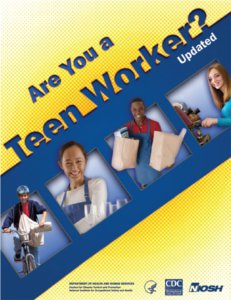 Twenty-three million young people are expected to seek summer jobs this year, many entering the workplace for the first time. There is often little or no workplace violence training for young workers on the job, despite life-threatening risks.

Equally troubling is that more than 200,000 young workers annually are victims of sexual assault on the job, according to data from the Shuster Institute for Investigative Journalism at Brandeis University.

To promote workplace safety, OSHA has provided a safety training grant for Teens Lead @ Work, a new national network of peer education programs, founded by four state occupational safety coalitions and a California university. The program trains teen safety peer leaders to educate their peers and co-workers on how to recognize and prevent workplace violence.

According to a survey of teen retail workers by the Massachusetts Coalition for Occupational Safety and Health (MassCOSH):

David Michaels, assistant secretary of labor for occupational safety and health, joined the group of teen safety peer educators for the telephone press conference on how young workers can recognize and prevent workplace violence, launching a national dialogue on workplace violence prevention.

Workplace violence is a risk faced by teens all over America, said Alice Kuang. Most workplaces do not institute any workplace violence training. “Isn’t that ridiculous?” she asked. Hundreds of thousands of teens are vulnerable each and every summer, she said.

The need exists for a policy on how to approach an aggressive customer in small and large retail shops, said Rosanne Foley. Confrontations can and do escalate to the point of violence, which is why policies and training are needed.

Michaels has spoken often of OSHA’s focus on protecting the most vulnerable workers, including teen workers. OSHA is funding safety and health training through Susan B. Harwood grants. Every nine minutes a U.S. teen gets hurt on the job, said Michaels. In 2012 more than 361 young workers were killed on the job, he said. Michaels added that OSHA applauds teen-to-teen training to prevent workplace violence. Violence is a workplace hazard recognized by OSHA general duty obligations. Employers need to provide training and protection, and to encourage teen workers to speak up about safety concerns and risks, said Michaels.

In the past four years 18 citations have been issued under OSHA’s general duty clause for workplace violence, according to Michaels. OSHA clearly saw a hazard and there was a feasible means of abatement, he said.

According to the OSHA chief, what constitutes a feasible means of abatement depends on the situation; retail is different than an emergency room. Preventive measures include having a working alarm and means of calling the police, in-store panic buttons, and the presence of security guards, he said.

The Massachusetts Coalition for Occupational Safety & Health (MassCOSH) sponsors Teens Lead @ Work, providing an empowering environment where teens develop their organizing skills, reach out to other teen workers, and promote safe, healthy work and strong enforcement of the Child Labor Laws. The program builds bridges among native-born, documented and undocumented teens in the fight for young worker rights.

Supporting young workers' efforts to research and identify issues of concern to them in the workplace and in their community;
Bringing youth together with their peers to discuss their concerns and to learn about work issues through the lenses of gender, race, and ethnicity;
Engaging teens in organizing strategies to address their concerns and foster young workers and environmental justice activists;
Informing Peer Leaders about the legislative process, and help them understand how everyone has the power to implement laws given the right tools;
Creating polished, confident peer educators that are incredibly effective in reaching out and teaching other teens.

Celebrate and be Proud.