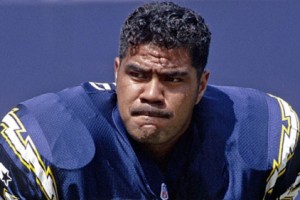 He was an NFL player who dominated offenses during his 20-year career. Junior Seau died of a self-inflicted gunshot to his chest. One of his greatest moments was a 17-13 win in the 1995 American Football Conference Championship game where he had 16 tackles…even though he suffered a pinched nerve in his neck from a tackle. He was only 43 when he died and was rumored to be suffering from the effects of multiple concussions over his life in organized football.

Imagine my concern when my 18-year old son told me last summer that he was signing up for the football team in his final year in high school. He had never played and, frankly, I didn’t steer him in that direction because I have high school buddies whose injuries impair them to this day.

In the initial parent meeting I was pleased when the trainer got up and started talking about safety. She handed out a form that me and my son had to sign that outlined their concussion policy. It stated that we agreed to report any concussion that he may experience immediately, taking himself out of a game if he had to. We also agreed to report any other teammate that we thought may have sustained a concussion. The coach issued a strong statement in support of this policy too.

I was impressed, but then got to thinking, “This is a good start, but what about on Friday night?” I chatted with some of the experienced kids, those who played football and were starters. They were honest. They worried about having to leave a game and told me stories about others who lost their starting position because of concussions. They told me that under no circumstance would they “rat on” another player if they got a concussion for fear they would hurt the team’s chances and risk losing a friend. Yes the trainer and coach’s exhortation was both honest and impressive, but the motivation on the field still may have motivated players to hide their concussions.

Playing through injury is admired. An invisible injury like concussions are even more likely to be swept aside by a player seeking to stay in the game. On ESPN.com, Seau’s ex-wife (who was with him during his NFL career) was quoted as saying "Of course he had (concussions). He always bounced back and kept on playing. "He's a warrior. That didn't stop him. I don't know what football player hasn't. It's not ballet. It's part of the game" (http://espn.go.com/nfl/story/_/id/7882750/junior-seau-former-san-diego-charger-found-dead-cops-probe-suicide).

Staying in the game is dangerous in the work setting. Employees need to be coached about reporting injuries, their own and their peers’. The game’s rules need to be adapted to thank those who report. Minor injury and near miss reporting should be tracked, analyzed, and celebrated because they prevent future injuries.

P.S. The Centers for Disease Control offers an Acute Concussion Evaluation (ACE) care plan that can be used by companies to educate workers on concussions (http://www.cdc.gov/concussion/headsup/pdf/ACE_care_plan_returning_to_work-a.pdf)