Get real: OSHA won’t be charging in on a white horse to save your job 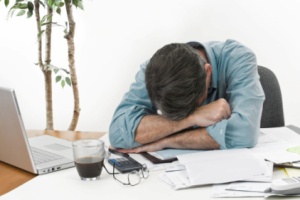 As a good friend recently told me, "so many of us have had our heads buried in the feeding trough earning a living and paying our bills, we have not had time to look up and pay attention to what the hell is going on around us."

I'm sure there is a certain number of employees that harbor a "Fear at Work" mindset that ranges from being laid off to either being seriously injured, killed or contracting a life debilitating disease.

Mark Hansen raises an excellent point that those who have managed to fly under the radar are now being caught by such simple practices as performance measures and accountability. Amazing how long this took to happen. Smoozing helps a little, but again those receiving the smoozes are expecting results, because they are finding their smoozing isn't working with their own boss.

Work is evolving into a "new normal" that is going to be radically different than what we have become accustomed to since WWII; hell, since 2008. With the advent of globalization it is entirely too easy for a company to shutter its operations and reopen in some third world country. Manufacturing jobs in the USA have been on a precipitous decline for years.  Sure there has been a slight uptick in recent years, but overall we are nowhere near the highs of the 1970s, 1980s and 1990s. BTW, these are the Middle Class jobs that get paid serious salaries and who pay serious amounts of taxes, FICA, etc.

Is the "Fear at Work" about getting hurt or is it more about holding onto a job. From a systems thinking perspective, it very well may be a synergistic affect that is occurring here versus one or the other or even other contributing factors.

Recently, a consulting firm asked me what I thought about their client's safety program trying to answer the question as to why their client's recordables were dramatically increasing. On paper, the client's safety program was tremendous. Nice and pretty, four-color process printing, charts, graphs, tables, software packages, screen savers, etc. With all this data generation, I wondered when the safety pros got any real work done. Oh, excuse me, this has become real work.

After reading the client's annual financial report and reviewing a variety of interviews with employees and management it was obvious to me that the client would likely experience at least one fatality within six months without my even visiting the site.

According to the consulting firm's interviews, training of new employees appeared to be nothing more than checking the box and getting them out in the field to work. This is nothing short of a disaster waiting to happen. Is there any "Fear at Work" in this situation. Apparently so and it is rising according to the consulting firm's folks working at the plant site. But this is more about not just getting hurt, but permanently losing a job through disability or death.

I know there are groups (i.e., unions) that are going to fight this "new normal" of work till the last man/woman standing, but unless they own the company, as is the case in General Motors, they are going to have to find some other way to come to the realization that the taxpayers are fed up with paying outrageous pensions and benefits and bailing out firms for making bad decisions. The gravy train is pulling in the station and there is no more fuel to keep it running.

What are the current Union owners of GM going to do when customers stop buying their cars and stop trading in their old cars. This is already beginning to happen. Is GM going to introduce a model every other year instead of every year? Are major model changes going to occur every 10 years instead of every 3 or 4 or 5?

Ever wonder why Asian car manufacturers are building cars and trucks in the USA instead of Asia? It has a lot more to do with competing using non-union USA labor than with merely transportation costs.

Many at GM think the taxpayers should bail them out again. Is GM destined to be bought out by China or India who would inevitably restructure the company and all of its pension and benefits? I don't think China would buy GM, because there are far more valuable company assets in this country to purchase at depressed prices. Bottom line, these are the kinds of issues that create "Fear at Work."  f not, then unfortunately, employees are not paying attention. Remember the "feeding trough."

The point being made, business is no longer being run like business in the past. Guess what, it isn't going to be run that way in the future, EVER AGAIN!  We need to get used to it and learn how to be very agile and innovative.

Good example of this…Samsung just lost a major lawsuit ($1.05 billion) to Apple for patent infringement. Samsung now sits in the same unenviable spot many companies find themselves in now…Samsung can no longer be an "Imitator" it now has to become an "Innovator." This is very difficult to do, when all your bench strength knows how to do is COPY.

Employees need to momentarily raise their heads from the feeding trough and start paying attention to what is going on around them from a business standpoint.

SH&E pros need to spend more time paying attention to their company's annual and quarterly reports, understanding what their company's strategic short and long-term plans are and creating new ways to deliver safety, health and environmental performance in such a fashion that it beats the hell out of the domestic and foreign competition.

If NIOSH's Dr. John Howard wants SH&E pros to become "…louder and bolder and more courageous" let's give it to him in spades in the context of making our domestic enterprises more competitive. BTW, to be more competitive, employees need to show up to work and WORK, not sitting around trying to figure out excuses on how to game the system to receive disability, or 99 weeks of unemployment, etc. It costs real money when an employee does not clock in, both in time lost, injury costs, productivity loss and revenue loss; not to mention the slack that needs to be picked up by his or her co-workers.

I am sure OSHA's Dr. David Michaels believes industry needs more fall prevention, heat safety campaigns, Globally Harmonized System for Classification and Labeling of Chemicals, Injury and Illness Prevention Programs and emphasis for health care workers, but think, for just a minute or two, how much additional costs are going to be borne by the American taxpayer to implement all of these new programs when they buy products at the store?

These costs are not going to be absorbed by the company, never have been.

Another question, when do you think our foreign competitors are going to implement these same programs and burden their populations with these costs?  For me, the word NEVER screams out loud.

For you Baby Boomer SH&E pros, implementing these new programs just might get you to "Full Retirement Age" eligible for Social Security, but with the rapid decline in the value of the dollar thanks to the FED, the onslaught of inflation leading to the horrendous increase in the price of goods and services, not to mention health care, your retirement is going to really SUCK if you haven't saved a bunch of money and own buckets of gold bullion.

So if you want to reduce "Fear at Work," let's be "louder" about costs and savings, "bolder" about creative solutions, and "more courageous" about introducing innovative approaches to safety and STOP waiting for OSHA and NIOSH to be the basis for our existence.