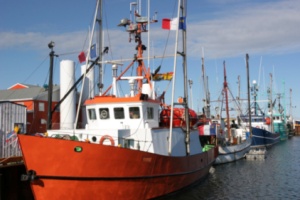 Think about wearing a life jacket to work. What comes to mind? Do you think cool, comfortable, and easy-to-work in? Or, are you more inclined to think of life jackets as cumbersome, uncomfortable, and interfering? If you are leaning toward the latter, you’re right on track with what NIOSH heard from commercial fishermen back in 2008.

It is an indisputable fact: personal flotation devices (PFDs), or life jackets, save lives.1-3 However, in the commercial fishing industry where almost 90% of fatalities are caused by drowning after a fall overboard or vessel disaster, many fishermen do not routinely wear PFDs while working on deck. 4

In 2008, the NIOSH Alaska Pacific Office conducted a survey of commercial fishermen and learned a great deal about the predictors of PFD use. Fishermen who believed that PFDs interfered with their work or created an entanglement hazard were less likely to wear PFDs. NIOSH researchers concluded that fishermen may wear PFDs more often if they are familiar with newer models that have features which alleviate their concerns regarding comfort and ease of movement.5

As part of this research project, fishermen were also asked to evaluate PFDs with differing features to test for comfort, functionality, and ultimately, provide input on which type of commercially available PFD resulted in the highest worker satisfaction in actual fishing industry working conditions. Not surprisingly, NIOSH learned that fishermen had varying preferences because they work on different types of fishing vessels, using different types of gear.6 Since no federal regulations mandating the use of PFDs exist in the commercial fishing industry, NIOSH suggested that manufacturers may have more success in supplying PFDs if they engage workers in...Click here to read the rest of the blog post.

Having a purpose in life may help your brain age better