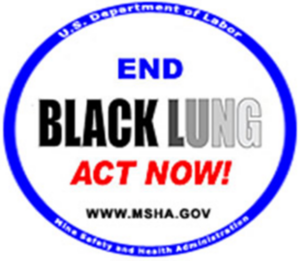 In an effort to spare others the same fate, the Mine Safety and Health Administration published a final rule, which took effect in August 2014, to lower miners' exposure to respirable coal mine dust in all underground and surface coal mines. From Aug. 1 through Dec. 31, 2014 — the first phase of the rule — more than 23,600 dust samples have been collected, and results show that about 99 percent of samples are in compliance. Since MSHA launched its "End Back Lung — Act Now" campaign in 2009, the yearly average of respirable dust levels of designated mining occupations in underground coal mines has fallen every year and, in 2014, reached the lowest level ever recorded.

"These results show that the new dust rule is working, and miners should be breathing cleaner air at coal mines," said Joseph A. Main, assistant secretary of labor for mine safety and health. "Despite concerns from some in the mining industry, most of the valid samples collected have met compliance levels. That's good news for the health of all coal miners and our efforts to end black lung disease," Main said.

Of the total respirable dust samples collected in the five-month period, 17,949 were taken from 319 underground mines; 252 of those samples (or 1.4 percent) exceeded compliance levels used to determine if a violation is warranted.

"Lowering Miners' Exposure to Respirable Coal Mine Dust, Including Continuous Personal Dust Monitors," became effective on Aug. 1, 2014, and substantially increases operator sampling for respirable coal mine dust and requires an operator to take immediate corrective action when an operator's sample shows excessive concentrations. The final rule authorizes MSHA to cite an operator based on a single MSHA sample showing excessive dust, rather than on an average of samples.

MSHA's latest stakeholder outreach on the new rule included a workshop in collaboration with the National Institute for Occupational Safety and Health. Held on Oct. 28 at the National Mine Health and Safety Academy in Beaver, West Virginia, the workshop was entitled "Best Practices for Controlling Respirable Dust in Coal Mines."

Prolonged exposure to respirable coal mine dust causes lung diseases, such as coal workers' pneumoconiosis, emphysema and progressive massive fibrosis. These diseases collectively referred to as "black lung," can lead to permanent disability and death. NIOSH estimates more than 76,000 miners have died since 1968 as the result of the disease, and more than $45 billion in federal compensation benefits have been paid out to coal miners disabled by black lung and those who survived them. Evidence indicates that more still needs to be done as miners, including young miners, continue to be diagnosed with the disease.