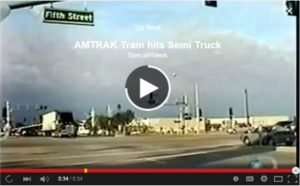 A collision between an Amtrak train and a tractor-trailer yesterday in North Carolina injured dozens of passengers. There were no fatalities.

A spokesman for the state’s Department of Transportation said the locomotive and baggage car of the train derailed during the accident, which occurred at a crossing. News sources reported that the truck was carrying an oversized load and was unable to move out of the way of the train in time.

A spokesman for the North Carolina State Highway Patrol said the truck was being escorted by state troopers because of its large load.

Dozens of the 213 passengers on board the train were treated at a local hospital, mostly for minor injuries. None of the Amtrak train’s eight crew members were injured in the crash, according to a statement issued by the company.

There was no word on whether t he driver of the truck was injured.

Amtrak and the Federal Railroad Administration are investigating the incident.