Actually some things have changed… 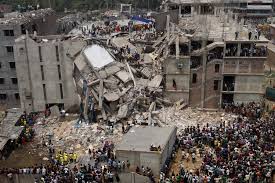 April 24th marked the third anniversary of the collapse of the Rana Plaza building in Savar, Bangladesh, that killed 1,138 garment workers in a moment and injured 2,500 others, some disabled for life.

The occasion was marked by a large number of statements from governments, prominent organizations and individuals, as well as a slew of reports on the state of workers’ health and safety in the global garment supply chain. There were numerous articles in the print media around the world, as well as some television coverage.

That’s a good thing because for working conditions to improve in any global supply chain, and especially in apparel factories in Bangladesh, the issue of workers’ health in safety in supplier factories in the developing world must be kept in the public eye. Both progress and failures must be noted and publicized – or the lives of so many dead workers will fade away and the conditions that killed them will creep back.

But there is one aspect of the media coverage of the Rana Plaza anniversary that I disagree with: I think the articles that claim “nothing has changed” in Bangladesh are mistaken and are missing a big story.

Of course, working conditions in garment factories in Bangladesh are still hazardous in most plants, the labor laws of the country are not enforced, and the rights of the garment workers are not respected.

All this flows from the “sweatshop business model” of the international clothing brands and retailers whose “iron triangle of sourcing” (lowest possible price, highest possible quality, and fastest possible delivery times) is the underlying and unchanged reason for the “race to the bottom” in global supply chains in garment, electronics, toys, sports shoes and equipment, among others.

Until the dominant business model of global capitalism is changed and the rights of workers respected - factory conditions will continue to be unsafe, unhealthy and abusive in most locations.

But it is mistake to ignore that there have been some unprecedented things occurring in Bangladesh - which could serve as an example of how to actually improve conditions in global supply chains throughout the world.

More than 3,600 garment factories in Bangladesh have had genuine, independent and competent inspections conducted of fire, electrical and building safety hazards (not the only hazards there, of course, but the place to start). The results of inspections have been made public - all posted with photos and Corrective Action Plans on the web for anyone to see.

Correction of the hazards identified in these inspections is mandatory and the brands producing in these factories have already been publicly called out and shamed for their failure to correct these hazards.

And Bangladesh garment workers have the right - whether they can actually exercise it is the next step, of course - to participate in health and safety inspections, in factory H&S committees, to call attention to safety and health hazards without retaliation.

So to dismiss the hard-won advances  - obviously incomplete - misses the point that there is an example here that could and should be adopted elsewhere: independent, competent inspections that are public; and that require hazard correction paid for by the buyers; and that involve genuine worker participation at the factory level to resolve.

One not insignificant fact is that the number of factories fires in Bangladesh since Rana Plaza has declined by 90%, although several workers have were killed in those that did occur.

Of course, the correction of identified hazards is way behind schedule - and workers do not have the right in practice to unionize free from retaliation. But we know who is the responsible party for these failures: the international clothing brands and retailers.

The brands are paying suppliers less today than at the time of Rana Plaza, despite increases in the minimum wage and the costs of repairing or relocating factories.
The brands have not given supplier factories long term contracts that would assure suppliers that loans taken out to repair factories could be repaid by future orders.
The brands publicly demand absolute adherence by suppliers to the brands’ “corporate social responsibility” codes while their sourcing practices and lack of financial support make it nearly impossible for the factories to respect wage and hour laws, actually protect workers’ health and safety, and actually respect the rights of workers to form unions to improve their lives.

As we all know, life is complicated. What has happened in Bangladesh’s garment factories over the past three years is also complicated. Some good things have happened. Many other things have not improved, or only slightly.

But one danger in this situation is to conclude “nothing ever works” and “nothing ever improves” - so then the next thought is “why bother”?  And that is the biggest hazard of all…