Early last summer, a massive flood hit areas of West Virginia, leaving 23 dead. It was among the most deadly floods in the state’s history and led Governor Earl Ray Tomblin to declare states of emergency in 44 of the state’s 55 counties. The National Guard was deployed to assist stranded residents, and hundreds of homes were lost or severely damaged in the flooding. The small town of Clendenin (approx. 1200 residents) was hit particularly hard, with news reports describing the whole town as being underwater. 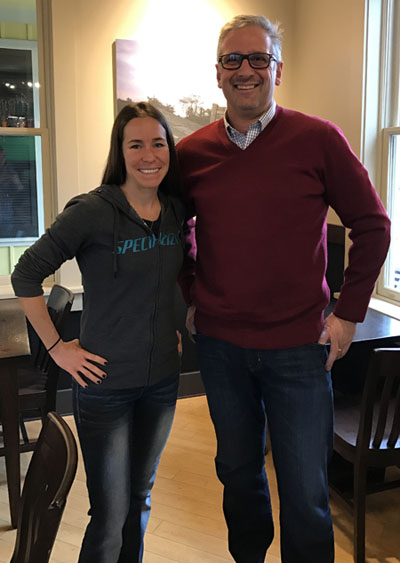 A few hours away, in Columbus, Ohio, professional triathlete Carrie McCoy watched the news in horror. The heart-wrenching devastation touched her and drove her to act. Her church organized a group of people to travel to Clendenin and she volunteered to join, but she wasn’t prepared for what she saw.

“It was like a war zone,” said McCoy, who also runs an after-school program for disadvantaged youth in Hawaii called Kona Kids, splitting her time between Hawaii and Ohio each year. “Helicopters and Salvation Army and the Red Cross and National Guard, I had never seen anything like it. If you look at the river and where those houses are, you wouldn’t think the water level could ever get that high. It was devastating. I knew more needed to be done than what we could complete on that initial trip.” After her first visit, McCoy decided to informally organize her own group on Facebook to return to the area and provide further assistance.

Fellow Columbus resident Tony Spearing saw her posts and wanted to help. Spearing is Vice President of Brass Knuckle, a manufacturer of high quality personal protective equipment including safety eyewear, hand protection, protective clothing and ergonomic products. He knew McCoy and her team would need gear, as would the affected residents who would be working to dig out and rebuild.

Spearing and McCoy communicated about what work she and her group would be doing and what products residents might need that Brass Knuckle could provide via McCoy and her team. They planned to winterize RVs so residents using them as temporary housing would be able to stay warm. She described the conditions and what challenges and hazards people were facing in trying to recover and rebuild.

When McCoy returned in December of 2016, she and her team of eight volunteers brought Brass Knuckle products with them, including approximately 100 safety glasses and 50 pairs of gloves to use for the team and distribute to residents, as needed. McCoy studied up on each of the products to know which would be most appropriate for specific types of work or hazards. She and her team were glad to be able to continue to offer help after initial emergency aid services had stopped.

“People feel abandoned,” said McCoy. “Charleston is completely recovered, and doing much better, but (Clendenin) feels completely forgotten. Volunteer groups like ours, we hope, can really make a difference.”

McCoy and Spearing finally got to meet in person in January. She got a chance to thank him in person for his contributions and to tell him how much the donation of goods meant to the team and the affected residents.

“I’m glad we were able to help out. The work Carrie and her team have been doing is altruistic, certainly, but also important for the rebuild efforts,” said Spearing. “There are a lot of uses for our protective products, obviously in factory work or construction, but there is always need for tough protective gear in emergency situations.”

“I don’t think he realized what an wonderful gift this would be,” said McCoy. “And the quality of the products was amazing. Some focused more on grip, some on working in cold or in wet conditions. Really thoughtful and useful products that are in a lot of homes now.”

McCoy intends to return to Clendenin in April to provide additional support where needed.

Brass Knuckle® grew out of a partnership with one of North America’s oldest dedicated safety product supply companies. From product inception to quality control, we manage every aspect of product development to ensure ergonomics, protection and cost efficiency, maximizing compliance and safety. Brass Knuckle is a member of the Volk Enterprises family of companies, whose international strategic alliances with documented professional supply partners allow for a full range of safety products, programs and services to clients across the globe. For more information, contact Brass Knuckle® Safety Products, 1335 Ridgeland Parkway, Suite 120, Alpharetta, GA 30004. Phone: 770-674-8930. www.brassknuckleprotection.com.