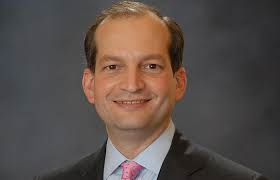 R. Alexander Acosta, 48, was tabbed by President Trump on February 16 to be the next Secretary of Labor, following the failed nomination of fast-food king Andrew F. Puzder.

Acosta is a seemingly safe selection. Said Richard L. Trumka, president of the AFL-CIO: “Unlike Andy Puzder, Alexander Acosta’s nomination deserves serious consideration. In one day, we’ve gone from a fast-food chain CEO who routinely violated labor law to a public servant with experience enforcing it.”

Acosta is currently the dean of Florida International University’s law school, and would be the first Hispanic in Trump’s cabinet. His most relevant experience for the Labor Department top job is his time at the National Labor Relations Board, where he was a member from 2002 to 2003 under President George W. Bush.

Bush later tapped Acosta to be assistant attorney general for the Justice Department’s civil rights division, one of the highest positions at the DOJ.

After building a career in Washington, Acosta, a Harvard Law School grad, returned to his hometown of Miami, FL, as a U.S. attorney. As a top federal prosecutor in Miami, Acosta led the case against Washington GOP lobbyist Jack Abramoff, who was charged with wire fraud and conspiracy related to the purchase of gambling boats. Abramoff pleaded guilty to conspiracy, fraud and tax changes in 2006.

On at least two occasions Acosta has defended the civil rights of Muslim-Americans. In 2004, he helped defend an 11-year-old student who had sued her Oklahoma school district for requiring her to remove her hijab because it violated the school’s dress code. The school district settled with the Justice Department and changed its dress code. In 2011, Acosta testified before Congress in support of protecting Muslim-American civil rights. He said even though “emotions remained charged ten years after 9/11, it was a good time for Americans to remember “that no community has a monopoly on any particular type of crime.”