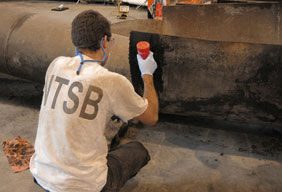 That’s the finding released today by the National Transportation Safety Board (NTSB), which conducted a nearly year-long investigation into the catastrophe that occurred when a pipeline owned and operated by Pacific Gas & Electric ruptured in a quiet residential neighborhood.

"Our investigation revealed that for years, PG&E exploited weaknesses in a lax system of oversight," said NTSB Chairman Deborah A.P. Hersman. "We also identified regulators that placed a blind trust in the companies that they were charged with overseeing to the detriment of public safety."

The force of the rupture ejected a 3000-pound 28-foot-long section of pipe about 100 feet from where it had been buried four feet underground. The released natural gas ignited into a towering fire that consumed homes and forced the evacuation of scores of people.

PG&E didn’t even know what kind of pipe it had installed beneath the city of San Bruno in 1956, according to the NTSB. PG&E records initially provided to the examiners indicated that the ruptured section of pipe was a 30" seamless pipe when in fact, no manufacturer at that time produced seamless pipe.

Investigators also determined that the ruptured section of pipe was a collection of short pipe pieces, commonly known as "pups," joined together with welds. Further metallurgic assessment by NTSB investigators determined that some of the pipe sections did not meet minimum material specifications and that the welds were poorly constructed.

“The defective welds would have been visibly detectable at the time of the installation, but, because of PG&E's inadequate quality control during the construction project and its failure to maintain accurate records, the poorly welded section of pipe went undetected for over 50 years” reads the NTSB report, which goes on to cite failure of one of the improperly welded seams as the specific cause of the 2010 rupture – the result of an increase in pressure due to repair work being performed at a terminal upstream of the rupture site.

The Board determined that the accident was clearly preventable, stating that PG&E's inadequate pipeline integrity management program failed to identify, detect, and remove the substandard pipe segments before they ruptured.

"This tragedy began years ago with PG&E's 1956 installation of a woefully inadequate pipe," said Chairman Hersman. "It was compounded by a litany of failures - including poor recordkeeping, inadequate inspection programs, and an integrity management program without integrity."

In a statement released by PG&E, the company said it was “grateful” for the NTSB’s “meticulous review of evidence, finding of facts and thoughtful recommendations.”

“The accident in San Bruno was a tragedy and we are deeply sorry that our pipeline was the cause. We know that nothing we can say nor any action we can take will ever make up for the losses experienced by the victims of the accident and the San Bruno community.”

Government regulatory agencies came in for their share of blame, as well, particularly the California Public Utilities Commission (CPUC) and the U.S. Department of Transportation. The NTSB said that two agencies made regulatory decisions that exempted older pipelines from testing protocols required of newer ones, allowing  the flawed pipe to escape detection.

The Safety Board found that CPUC did not effectively evaluate or assess the safety of PG&E's integrity management program. On the federal side, the NTSB said that PHMSA's grandfathering of pre-1970 pipe contributed to the accident.

"For government to do its job - safeguard the public - it cannot trust alone, it must verify through effective oversight," said Hersman. "As we saw in San Bruno, when the approach to safety is lax, the consequences can be deadly."

PG&E said it planned to adopt the NTSB’s recommendations and that it has already taken steps to ensure system safety, such as reducing pressure on more than 1,600 miles of gas transmission pipelines and using new in-line camera technology to inspect interior welds

A synopsis of the NTSB report is available at: http://go.usa.gov/kJd.