Peril in the west 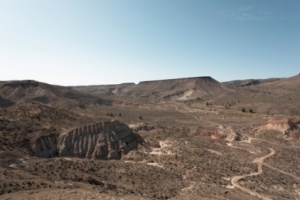 Mesothelioma, an exceedingly rare and lethal form of cancer, was once thought to be caused only by inhaling asbestos fibers.

Then in the late 1970s, when astonishing rates of the disease were reported among villagers in central Turkey, it turned out that a different fibrous mineral was the culprit. Erionite was abundant in native soil and stone, and so easy to work with that villagers had used it to build homes.

In the most devastated communities, known locally as “cancer villages,” mesothelioma rates were off the charts — responsible for 40 percent to 50 percent of all deaths. Animal studies showed erionite to be 100 to 800 times more carcinogenic than asbestos and, according to a scientific paper, “almost certainly the most toxic naturally occurring fibrous mineral known.”

In the U.S., medical journals and news stories presented the Turkish epidemic as a gruesome, but distant, catastrophe. They largely omitted a key fact: Erionite deposits are present at scores of sites in at least a dozen western U.S. states.

Interviews and documents from the 1980s show there was a flicker of interest in assessing the risks in the U.S., but researchers and officials lost interest and moved on to other things.

The result is that, after three decades, erionite remains a word most Americans — and many environmental officials — have never heard. Amid an expansion of roads, pipelines, power lines, wind and solar farms and recreation sites in remote areas of the West, erionite is unregulated, and federal agencies have failed to alert land-use officials, developers and residents of affected areas so that they might take precautions on their own.

Uneasy about the long silence, some government officials and scientists are trying to fashion a federal response. Toward that end, a meeting planned next Wednesday at the National Institutes of Health will bring together representatives of the Environmental Protection Agency, the National Institute for Occupational Safety and Health, the Mine Safety and Health Administration, and the U.S. Geological Survey, to discuss potential risks from erionite and other hazardous minerals.

“We need to be cautious because there’s clear evidence of disease” from mineral fibers, said Dr. Aubrey Miller, a senior medical advisor at the National Institute of Environmental Health Sciences, who will chair the meeting.

“At a minimum, we can begin to start to educate the public and policymakers,” he told FairWarning. “I certainly don’t want to count bodies later.”

Driving the renewed interest is fear of repeating past government failures to promptly inform the public of potential hazards.

One case involved Libby, Montana, where asbestos contamination from a mine near the town caused scores of deaths and illnesses among workers and residents. Vermiculite ore tainted by asbestos and mined from about 1920 to 1990 was given to unwary residents for use as insulation and in other building projects. When the EPA arrived on the scene in 1999, it came under scathing criticism for failing to act earlier to inform the community and launch a cleanup.

Then came the disclosure that road crews in North Dakota, heedless of the danger, had used erionite-tainted gravel to cover hundreds of miles of unpaved roads in the western part of the state, including school bus routes, along with parking lots and recreation sites.

Erionite is found where volcanic ash and rock have been weathered by alkaline water. Like asbestos, it is harmless until it is disturbed, and the microscopic, needle-like fibers become airborne. And like asbestos, greater and more frequent exposure generally means higher risks.

No proof has emerged of erionite-related illnesses in North Dakota or other western states, but experts say that is less than reassuring. Mesothelioma usually takes 30 to 50 years to develop, is sometimes mistaken for other cancers, and when identified is often automatically assumed to be asbestos-related.

In central Mexico, a mesothelioma cluster has been reported in a rural area near the border of Zacatecas and Jalisco states. Medical reports say victims had no known exposure to asbestos, but lived on a plain rich in zeolites, the mineral family that includes erionite.

When Turkish researchers in the 1970s found soaring rates of mesothelioma in the Cappadocia region, they linked it to villagers inhaling dust while farming potatoes and scallions. They soon discovered that residents were also being exposed inside their homes built with erionite-containing stones.

Research later uncovered a genetic factor. People in the hardest-hit villages had long been shunned by horrified outsiders, leading to inbreeding and magnifying the risk for those with a genetic predisposition to the harmful effects.

Documents reflect a brief interest in the health implications for the American West.

In an area of north central Nevada where erionite was present in road dust, researchers from the University of Utah in the early 1980s examined chest radiographs from a local hospital, but turned up nothing unusual. But they also published a case report describing a local road construction worker with respiratory disease whose lung biopsy showed fibrous particles “consistent with erionite.” An investigation of mesothelioma “in the Intermountain region and exposure relationships would be useful,” they wrote.

But according to two of the researchers, Dr. William N. Rom, currently director of the pulmonary division at the New York University School of Medicine, and Dr. Kenneth R. Casey, now at the University of Cincinnati College of Medicine, their request for a grant from the institutes of health was turned down.

About the same time, with the Defense Department proposing to build a network of “racetracks” to shuttle nuclear MX missiles over a vast area of the Great Basin, opponents seized on the problem of erionite dust. The plan was abandoned, and interest in erionite faded, too.

It was revived by chance after an official from the U.S. Geological Survey gave a talk at the spring banquet of the University of North Dakota geology department in 2005. He spoke of the need for geologists to be aware of naturally occurring hazards, mentioning erionite. An assistant professor named Nels Forsman piped up: “Hey, we’ve got some of that right here in North Dakota.”

In the mid-1980s, Forsman had done a field study in the Killdeer Mountains of western North Dakota for the state geological survey. His 1986 report noted the presence of erionite, but he knew nothing of the events in Turkey and didn’t give it much thought.

“Nobody in our department had heard anything about it” until the banquet, Forsman told FairWarning.

But Forsman then alerted the geological survey, which contacted the state health department, which in turn brought in the EPA. Their investigation launched in 2006 revealed that erionite-containing gravel from pits in western North Dakota had been spread over some 300 miles of unpaved roads.

Air sampling along the gravel roadways and in vehicles, including inside school buses, revealed erionite levels similar to those in some stricken Turkish villages, though at lower concentrations than the most devastated communities. A preliminary health study that included 15 people thought to have high exposure to road gravel found two with pleural plaques, or lung scarring, consistent with inhalation of mineral fibers.

Though the erionite mess quickly erupted into a major story in North Dakota, it drew virtually no media attention outside the state. So complete was the blackout that last December, when Dr. Michele Carbone, a prominent mesothelioma researcher, briefed lung specialists at a national medical meeting in Chicago, it was the first they had heard of it, according to some who attended.

In response to the discovery, the North Dakota Department of Transportation has banned the use of erionite-containing gravel on state roads. But the western part of the state is in the midst of a gigantic oil boom, bringing a massive increase in truck traffic and road dust that residents say clouds visibility and may be harming crops and human health. Last month the state industrial commission and two of the most affected counties authorized a study of the best ways to reduce road dust.

Some agencies in other states are taking safety measures, though the efforts have been isolated and piecemeal.

In eastern Oregon, which has large erionite beds, the state transportation department is conducting a study. The idea is to avoid being “blissfully ignorant” of the locations of erionite or other naturally occurring hazards in future construction and maintenance work, said Matthew Mabey, a research engineer with the Oregon Department of Transportation.

In Montana, where road building crews in the 1960s ripped the top off an erionite-bearing mountain and spread the fill along more than three miles of State Highway 323, soil samples have shown erionite levels as high as 20 percent. Highway workers have been directed to use protective suits and respirators when their work involves land disturbance, such as clearing ditches and mowing vegetation.

In a joint report, Custer National Forest and Montana officials cited the need for a federal policy to reduce risks from erionite and naturally occurring asbestos.

Mining is another activity without any rules on erionite exposure. No erionite has been mined in the U.S. for about 30 years, but it is sometimes mixed in with other types of zeolites that are produced at a few mines in the West. According to an EPA report in 1987, a producer contacted by the agency stated that its zeolite products “can contain 10 to 30 percent erionite.”

Most zeolites produced today are of two varieties, chabazite and clinoptilolite. With their ability to trap and filter contaminants, they have been used to purify water and to treat radioactive and other hazardous wastes.

From its Mud Hills mine in the Mojave Desert in California, Steelhead Specialty Minerals has produced clinoptilolite for cleanup of the tsunami-stricken Fukushima nuclear plant in Japan, said its president Wallace McGregor.

Along with others in the industry, McGregor said current operators are well aware of erionite, and take pains to avoid it. But “I wouldn’t say there isn’t a trace,” he added. It’s “maybe an overstatement that there are not traces of a little bit of this, and a little bit of that, in a zeolite deposit.”

Carbone, who will be among those presenting at next Wednesday’s meeting at the Institutes of Health, has called for action to prevent and detect mesothelioma cases in North Dakota and other erionite-rich areas.

Mesothelioma is “a cancer that in most cases can be prevented,” he said in an interview. “We really have the possibility to do something…to prevent cancer in future generations.”

Myron Levin founded FairWarning after more than 20 years as a staff writer for the Los Angeles Times, where he was a member of the California investigations desk. He has won numerous honors and awards for his detailed investigations of health and safety matters, including an Alicia Patterson Foundation fellowship and the National Press Club’s Consumer Journalism Award. He has reported on the tobacco industry, auto and tire safety, and a variety of product liability issues. He likes hiking and playing racquetball, and he owns a minuscule share of a professional minor league baseball team. Myron is a member of FairWarning’s board of directors.