Mine security chief on trial for lying to feds 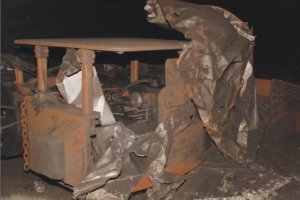 As the trial of the former chief of security at the Upper Big Branch Mine gets underway this week, the United Mine Workers (UMW) are calling the 2010 fatal explosion at the mine an act of “industrial homicide.”

60-year-old Hughie Elbert Stover is charged with lying to federal agents about safety violations at the West Virginia mine. At issue: whether or not the company routinely gave its workers advance notice of inspections – something prohibited by federal law.

The Upper Big Branch Mine accident killed 29 workers. An investigation by the Mine Safety and Health Administration (MSHA) found that mine owner Massey Energy failed to find and fix hazards at the Upper Big Branch mine and intimidated miners so that they wouldn’t report unsafe conditions and hid violations from government agencies.

The UMW issued a report on the mine based on its own investigation noting that established safety and health laws were “deliberately flouted” at the mine, even after federal and state agencies cited the operator multiple times for breaking the law. .

“The only conclusion that can be drawn is that Massey simply did not care if it broke the law. The safety of its employees was not worthy of its concern. The only thing that  mattered was getting the coal out.” .

The UMW’s report charged that the practice was company-wide and came from those at the highest corporate levels. .

“It is unconscionable, in the 21st Century, for a mine to be operated in the manner that (Upper Big Branch) UBB was. That it was allowed to be operated this way by the federal and state agencies is also unconscionable. Though not the perpetrators of the crimes committed at UBB, they failed in their responsibilities to be effective and thorough enforcers of the law. Once again, miners have died because they were put in harm’s way by their employer and not sufficiently protected by those who are charged with doing so.” .

UMW President Cecil Roberts called for the people who operated the mine to be brought to justice. To date, a federal criminal probe has only resulted in charges against Stover and a miner who faked foreman’s credentials.