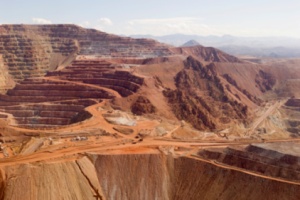 The  Federal Mine Safety and Health Review Commission has upheld two civil penalties issued to Freeport-McMoran Morenci Inc. in Greenlee County, Ariz., in the Sept. 1, 2008, death of a miner. Raymond Saldana, a 67-year-old contractor consultant, had been working on a belt replacement project at the surface copper mine's Number 6 bedding plant when he fell nearly 30 feet to his death through an opening on an elevated walkway. The 4-by-5-foot hole, created by the removal of two steel gratings, was marked off only by a 3.5-inch-wide yellow caution tape affixed to one side of the opening.

The Department of Labor's (DOL) Mine Safety and Health Administration (MSHA) issued one 104(d)(1) unwarrantable failure citation for the mine operator's failure to implement the appropriate federal standard, which states that openings above, below or near travelways through which persons or materials may fall shall be protected by railings, barriers or covers. The violation was assessed a $70,000 fine because it constituted more than ordinary negligence. Ronald Y. Jurado, the mine's supervisor in charge of belt replacement and present at the scene, was issued a special assessment of $7,000 for his culpability in the accident.

Attorneys for the mine operator argued that the tape was, in fact, an effective barrier under the federal standard, that there was fall protection available, that the area was not a travelway as defined under the standard, that the miner was impaired and that it was impractical to install a protective device around the hole because work was ongoing.

Administrative Law Judge William B. Moran rejected every one of these arguments, and found many of the defenses to be "distractions." The court did not agree with the respondent's view that the "notice" the tape provided satisfied the standard. "A yellow ribbon may provide notice when tied around the 'old oak tree' but mere notice is not sufficient to satisfy this safety standard," wrote Moran.

Moran also responded to an attempt by the mine operator to link the victim's fall to impairment caused by the presence of prescription drugs in his system at the time of his death. "Respondent has, in the Court's view, shamelessly suggested that the reason for the fatal fall is attributable to the victim's use of drugs. The Court observes that 'could effect' is a long way from 'did effect.' Directly stated, he had a sore knee and nothing else."